After plugging holes in the U.S.-Mexico border wall in Yuma with shipping containers, Arizona Governor Doug Ducey is now looking to do the same in Cochise County.

One hundred and thirty double-stacked shipping containers now cover more than 3,800 feet of the previously open border, filling the gap between Yuma County and Mexico.

It was a first-of-its-kind move from Ducey, signing the executive order after he said "Arizona has had enough" and "We can’t wait any longer," blaming the Biden administration for not acting sooner to secure the southern border. 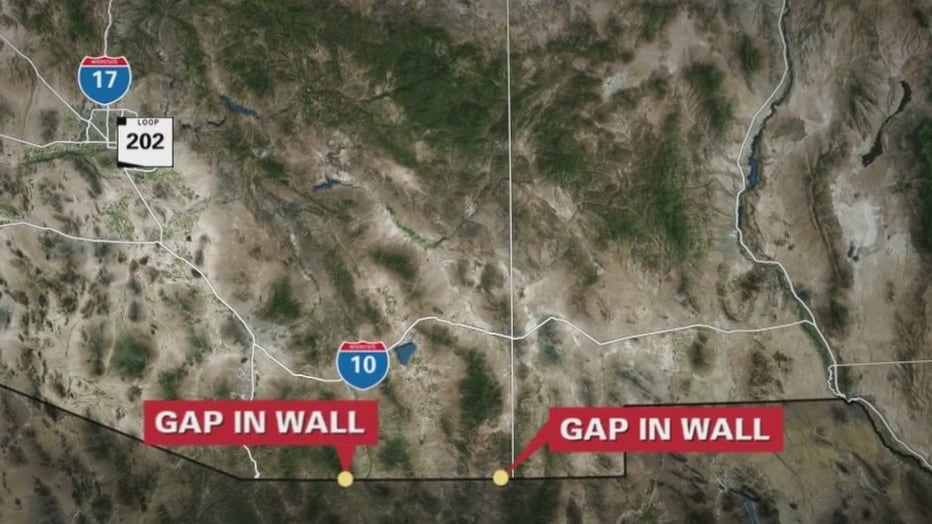 "Number one is, it sends a message," says Cochise County Sheriff Mark Dannels.

Ducey’s office says after the success of the border barrier mission in Yuma, they’re looking at other areas along the border where shipping containers could be an appropriate way to make the border more secure.

"I mean anything we do that helps secure our border, from physical barriers to virtual to messaging, and to action and consequences, the results is that we hope we deter crime we hope, that this will stop the criminal behavior we are seeing," Dannels said.

Some have criticized the move, saying it’s too costly and not practical. One of the shipping containers in Yuma toppled over soon after it was installed.

Arizona's desert sun bakes the sides of the containers, making the metal dangerously hot to the touch.

Looking ahead, Ducey says the shipping containers are not a permanent solution but have helped make it harder for people to cross.

"In Cochise County since January of this year, till to this week, we have had 926 border-related suspects. These are ones that committed state crimes, booked in my jail. That shows you that the impact, the negative impact that we are seeing, as a result of a border that’s been open. So again, I applaud the governor," the sheriff said.

The number of shipping containers needed to fill the Cochise County gaps and the cost of the undertaking are still to be determined.

"Right now we’re seeing about 800 to 900 people a day crossing. Part of the impact we have is the hospital. We have one hospital in this area, and it services all the medical needs for the migrants, but it’s not being reimbursed from the federal government. That’s amounting in this last 6-month period $20 million. Those costs are then passed on to the other customers of the hospital," said Yuma Mayor Douglas Nicholls.

A look at the border crisis from Yuma, a major crossing from Mexico into Arizona

A record number of migrants are reaching the border states, and Yuma is one of the towns dealing with the influx. FOX 10's Marissa Sarbak has a look.