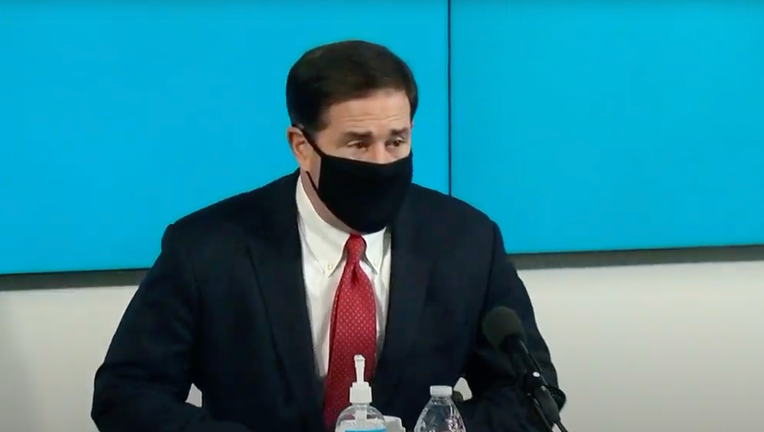 Gov. Doug Ducey at a COVID-19 news conference in July.

PHOENIX (AP) - Arizona Gov. Doug Ducey has been focused for nine months on the coronavirus that has sickened more than a half-million Arizonans and killed nearly 10,000.

His State of the State address set for Monday, Jan. 11 will continue that priority.

"We’re in a public health emergency, one that we’ve been trying to save as many lives and also at the same time communicate what the best behaviors for our citizens so they can avoid getting this virus," Ducey said in an interview Friday.

"We’ve been trying to protect our small business along the way as well, but with the vaccine here and vaccinations taking place, I look at this now as a race among other states," the Republican governor said. "And I want us to be among the leaders in getting this vaccine to the people that need it most."

Ducey has been broadly criticized for failing to reimpose business and other restrictions in recent weeks. This week, the state reached a tops-in-the-world spot for the most infections per resident.

The pandemic will change the Legislature’s typical opening day ceremonies, where the governor normally addresses a joint session of the Senate and House. Instead he’ll deliver his address to members remotely, and senators and representatives will not gather.

The governor said the policies and priorities he’ll announce Monday will include a focus on education and proposals on how to get children back to in-person learning and caught up from months of mainly remote classes.

"With what’s happened since March, kids have fallen behind in terms of math and reading skills and everything under the sun," Ducey said. "There was an achievement gap in our state before the pandemic. That achievement gap has only been exacerbated.

"So what we want to do is be part of the solution in catching kids up, getting them back to grade level," he said.

The governor, as is normal in interviews before his annual speech, didn’t tip his hand much. But he did say that refilling the state’s depleted unemployment insurance fund, using federal coronavirus relief cash he’s stashed away, will be a fixture of his plans.

"We believe the unemployment insurance fund is a fund we have to tend to," he said. "It’s one that deserves some attention, and we’ve got some flexibility in the dollars to tend to it."

And he said he’s open to reviewing legislation being planned by many Republicans who believe without evidence that President-elect Joe Biden’s victory in the state on Nov. 3 was fraudulent.

Ducey said just because he’s open to election reforms does not mean he agrees with those who think the election was somehow stolen from President Donald Trump.

"I’ve defended Arizona’s election process," he said. "We have over the course of 20 years made dozens and dozens of reforms to the election process without anyone citing any evidence except that this was a better idea.

"What I’m saying is I think everything across the board .... could be improved," Ducey said. "And that’s not just elections, that’s anything having to do with government or any entity."

The number of cranes seen in Phoenix is an indicator of sorts for the Valley's economy, and that is good news for Phoenix.

"We have a governor and health director who don’t care. Their goal in my opinion is to vaccinate their way out of this," said Will Humble, head of the Arizona Public Health Association. "Eventually it will work. There’s just going to be a lot of dead people in the meantime."