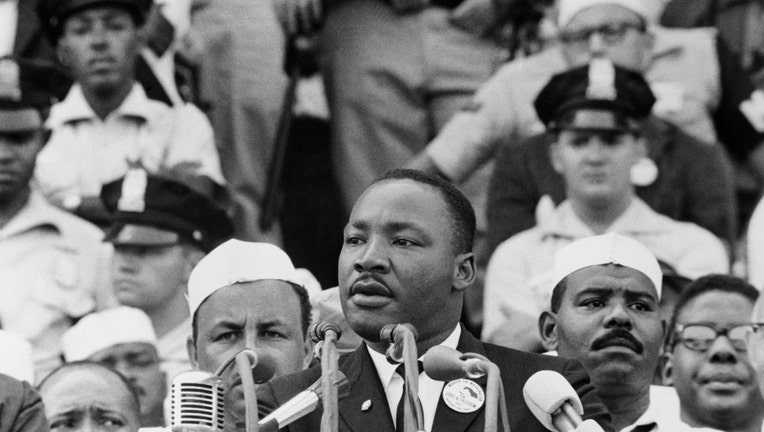 Martin Luther King Jr., gives his "I Have a Dream" speech to a crowd before the Lincoln Memorial during the Freedom March in Washington, DC, on August 28, 1963. The widely quoted speech became one of his most famous. (Getty)

PHOENIX - Government offices in Arizona were closed on Jan. 17, 2022 as a result of Martin Luther King Jr. Day, a holiday that was established to honor the late civil rights icon.

However, Martin Luther King Jr. Day wasn't always a state holiday for Arizona, and the state even attracted some level of controversy for its handling of the issue. Here's what you should know.

When did Martin Luther King Jr. Day become a holiday?

According to the U.S. Senate website, Congress enacted legislation providing for a Martin Luther King Jr. Day in 1983, marking the first time a federal holiday was established to commemorate the life of an African American. The holiday was first observed in 1986.

What happened in Arizona with regard to Martin Luther King Jr. Day?

The holiday, however, was cancelled by Governor Evan Mecham in 1987. The Associated Press reported at the time that Mecham had made it clear during his campaign for governor that he will rescind the holiday, even as 40 states have already followed the U.S. government's lead by then.

How did people react to Gov. Mecham's decision?

Then-Senate Minority Leader Alan Stephens, a Democrat, called the Republican governor’s action ″a major embarrassment to the state,″ adding that it places Arizona among ″the lower 10″ of the states that have not enacted a holiday.

″The rescinding of the King holiday is a sad day for our country and Arizona,″ members of a group that called themselves ‘Arizonans for a Martin Luther King Jr. State Holiday’ said.

"In my opinion, it was a very racist thing to do. With all due respect, you are a bigot," read a portion of a letter to Gov. Mecham, written by a person named Steve Frost, who was a high school student in Tucson at the time. The letter can be accessed via the Arizona State Library website.

"The state cannot afford to pay the many employees of the state for a holiday of a man who served as a major leader for civil rights. Yes, he did gain civil rights for blacks, but traditionally, the state has observed paid holidays for presidents of the United States only," read a portion of a letter to Gov. Mecham, written by a person named Trichelle James. The letter can be accessed via the Arizona State Library website. "Why should the State of Arizona pay employees for a holiday of a non-national leader?"

What happened next for Arizona?

In the immediate aftermath of Gov. Mecham's decision to cancel the King holiday, the AP reported that some meetings that was scheduled to be held in Arizona were canceled. In addition, Stevie Wonder announced a boycott of the state, and Rev. Jesse Jackson announced a cancellation of a trip to Arizona.

Some at the time also expressed concerns over the decision's impact on the state's tourism industry.

″It depends on how long this goes on,″ said Victor Teye, who was a professor at Arizona State University at the time. ″If it goes on for a long time, it could have a snowballing effect.″

At the time, tourism is Arizona's second-largest industry, accounting for an estimated 200,000 jobs, according to the AP.

How did Arizonans eventually get Martin Luther King Jr. Day as a state holiday?

According to the Pima County Public Library website, two separate ballot measures for a Martin Luther King Jr. Day holiday made it onto the 1990 state ballot. One of the measures would have eliminated Columbus Day for the new holiday, while the other would just add Martin Luther King Jr. Day on as a new holiday. Both measures failed to pass, and that led to another round of boycotts against Arizona.

In the aftermath of the failed votes, the NFL stripped the Phoenix area of its rights to host the 1993 Super Bowl, and gave the hosting rights to Los Angeles.

″I sympathize with the people in Phoenix, I really do,″ said Art Modell, who owned the Cleveland Browns at the time. ″But I don’t see how we had any choice.″

According to an AP article at the time, Arizona was tentatively awarded the 1996 Super Bowl, with the condition the state passes a referendum on making Martin Luther King Jr. Day a state holiday.

Documents on the Arizona Secretary of State's website state that a ballot measure to create Martin Luther King Jr. Day state holiday, while combining the Lincoln Day and Washington Day holidays into President's Day, made it onto the November 1992 ballot as Proposition 300. That measure was approved by voters.

By the time Proposition 300 passed, it was noted on the Pima County Public Library website that Arizona was the last state in the country to formally install an MLK holiday.