Art Huseonica's expedition was delayed twice due to COVID-19, but the 71-year-old Arizona man is finally ready to set off on an expedition that will take him down through parts of Canada, into Alaska and then the Bering Sea. FOX 10's Anita Roman reports.

PHOENIX - A journey of a thousand miles must begin with a single step, and in the case of an Arizona man, a 2,000-mile journey down Canada's Yukon River begins with a single paddle.

Art Huseonica is set to embark on a solo journey that will take him from Canada through Alaska, before flowing into the Bering Sea.

Huseonica knew when the time was right, he would face his next adventure.

"I've been on many, many adventures in my lifetime," said Huseonica. "I set several records. I set records on the Arizona Trail, I've set a modern era record on the Amazon River. Now, I'm heading out to the Yukon River.

At 71, the Arizonan explorer is going to paddle a frigid and remote river, in a trip he will attempt all on his own.

"I'm solo this year because it's really tough to find an expedition teammate," said Huseonica. "This is a dangerous expedition. It's a long expedition, and somebody that would come along with me, I would have to leave their family, leave their friends for about two-and-a-half months to make this entire expedition of 2,220 miles."

The COVID-19 pandemic forced an international border closure in 2020, when Huseonica first planned the trip with a partner. He encountered delays again in 2021, but Huseonica never bailed on his dream, and stayed the course.

"The expectation is to expect the unexpected," said Huseonica. "I love excitement coinciding with my adventure, and adventure is the unexpected and dealing with challenges."

Learning about the territory and the people is part of what Huseonica says he looks forward to the most.

While he will tackle this trip solo, he won't be alone.

"There's a lot of good that came out of it, actually, if you wanna put a positive spin on it. I got several First Nations people in the Yukon paddling with me, and also in Alaska," said Huseonica. "We're going to finalize those arrangements. We're gonna see what my schedule is when I enter into Alaska."

Coralee Johns is one of the people who will accompany Huseonica. Johns was born and raised in Whitehorse, which is located in the Yukon Territory. For the past 18 years, she has worked in the fish and wildlife and natural resources field, and holds a current position as the communications liaison for the Council of Conservation and Fisheries. Johns says what most people do not know is that the Yukon River is home to one of the longest salmon runs in the world. She is looking forward to paddling with Huseonica.

"I I've grown up here. I've never taken the time to paddle, even from Whitehorse to Dawson city, and I've always wanted to do that," said Johns. "So when I was approached through a family member, she was stating that we can paddle a while. Lake LaBarge, a portion of the the Yukon River. She had mentioned that we're able to paddle with him and talk about some salmon restoration projects, and a project that I personally spearheaded and took the lead on establishing and bringing Chinook back to our traditional territory at Fox Creek. I thought it would be a great segue into being able to share this knowledge, the important and invaluable."

Huseonica describes desire to push himself

While it is spring and the Yukon will be thawing from the winter freeze, temperatures will vary from 30 to 60 degrees. Huseonica is prepared to withstand wind, rain, and even snow if he has to.

"My biggest challenge on this journey is going to be staying safe. That's at the demands of my wife, Karen," said Huseonica. "There's gonna be a lot of bugs out there. Mosquitoes, it's going to be black bears, grizzly bears. I just have to be really careful. [The] most dangerous aspect of the expedition is the water. It's glacier, it's snowmelt water. It's going to be extremely cold, especially for the first half of the expedition. I need to get to shore up within three minutes before my body shuts down. I need to strip down, get dry clothes on, build a fire, get re-combobulated, and make sure I'm healthy to continue on."

Paddling, for Huseonica, brings peace. The Yukon will bring the unknown, as it will guide him to remote villages. It will also challenge him physically and mentally. Huseonica, however, says once he conquers it, the Yukon will be a chapter in his book, a moment in time never to be forgotten.

Huseonica is already in Canada, and is set to begin his journey down the Yukon River on May 27. He will be recording and documenting his entire trip. 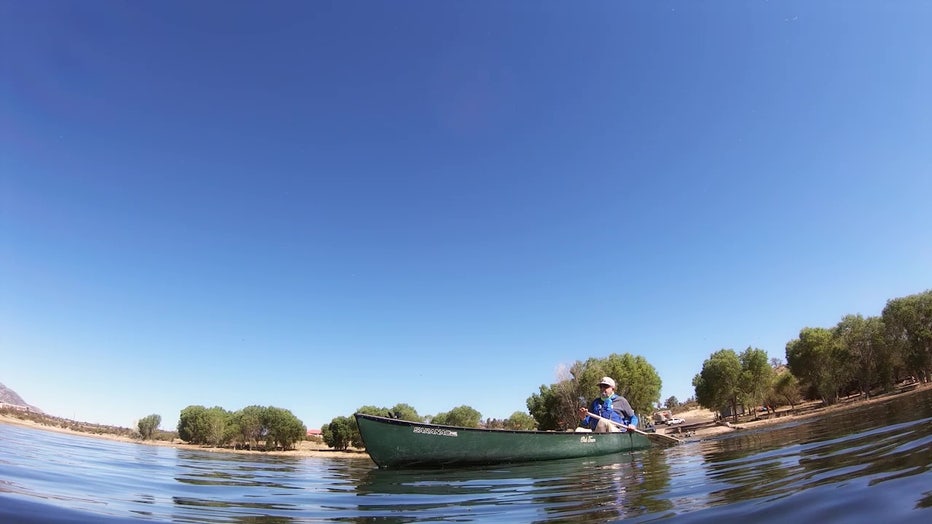