After a Chandler man trying to stop a gunfight was shot and paralyzed died over a year later, his death is ruled a homicide. Now, his family is trying to understand why charges were dismissed against the man they say is responsible. FOX 10 Investigative Reporter Justin Lum reports.

CHANDLER, Ariz. - A Chandler father of two who was paralyzed in a shooting died after battling health issues for a year and a half.

Police did arrest a suspect when this tragedy happened in 2020, but the case was recently dismissed. Victor Navarro’s family is seeking justice.

FOX 10 requested to sit down with the lead detective on this case, but a spokesperson with Chandler Police says our questions just can’t be answered due to it being an open investigation.

Victor's loved ones aren’t getting answers either.

His manner of death is officially a homicide, but before he passed, Victor lost hope in the legal system once a Maricopa County judge threw out the case against the suspect.

"When I talk about my son, that’s when the tears come," says Ophelia Navarro, Victor's mother.

The dark living room inside Ophelia's home tells a story. Her son spent much of the last year and a half bedridden at home surrounded by medical supplies.

"This made him have to be in four walls, as if it was a prison sentence to him," Ophelia said.

He once worked as an industrial automation technician. Victor was also an aspiring rapper.

His friends called him "Fawkes" for his Harry Potter fandom. He loved art, watching scary movies, and the Las Vegas Raiders but what mattered most of all, was his two daughters.

On Dec. 13, 2020, just before 4 a.m., a party bus arrived at the condo complex near West Chandler Boulevard and Arizona Avenue where Victor lived.

Ophelia says he was up late wrapping Christmas gifts for his girls when he noticed a fight outside. Police say an altercation between several people on the party bus spilled into the parking lot.

"He just ran downstairs and said he was gonna make sure he was OK and he walked out and walked into the line of gunfire, and he was shot twice," she said.

Shot in the stomach and neck, Victor somehow survived, but his life would change forever.

"One of the shots that hit him in the neck paralyzed him," the mother said.

Court documents show the person who rented the party bus had family and friends with him initially. Then, the bus picked up a group of nine people in north Scottsdale.

What ultimately led to the fight in Chandler is still unknown, but we do know the two groups quickly left the scene once shots were fired.

Shortly after, police found one group they learned to be from Chicago that was celebrating a friend’s 19th birthday. Documents say that friend is Cameron Booker who ran off and was finally taken into custody 13 hours later.

A witness on the bus told detectives he saw Booker holding a 9mm handgun before hearing gunfire and that Booker later talked about getting rid of the gun in the bushes. The teen was arrested and charged with aggravated assault but posted a $50,000 bond less than a month later.

Police say they found eight 9mm shell casings near the two main building walls surrounding the original crime scenes. We have asked Chandler Police officials if the gun used in the shooting was ever recovered.

"There is no answer due to open investigation," a spokesperson says.

Victor was seen laying on the ground with two gunshot wounds that night and there doesn't appear to be security cameras on the two main buildings closest to the original crime scene. 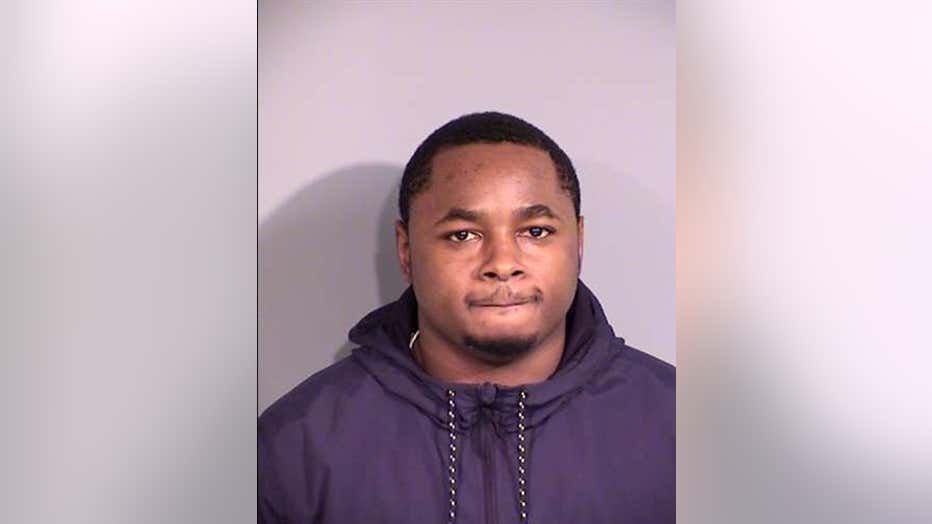 In May of this year, the Maricopa County Attorney’s Office (MCAO) motioned to dismiss the case saying prosecutors couldn't move forward.

"My son was very disappointed. His faith … the legal system … just dwindled to nothing. He had no faith in it," Ophelia said.

MCAO declined FOX 10's request for an interview but released a statement. It reads in part, "We are committed to working with Chandler Police to strengthen this case and seek justice for the victim of this shooting."

As for the most frustrating part of the investigation, Ophelia says, "That the guy who shot him got away. He wasn’t prosecuted for it. That they weren’t able to get enough evidence or just the fact that the guy got out on bail, and he was living his life while my son was suffering."

FOX 10 asked Chandler Police if witnesses are cooperating, and a spokesperson said due to the open investigation, they could not respond.

Ophelia says there’s clearly not a lack of people who watched the shooting unfold.

"How do you not know, or how can you not find somebody to identify the guy that shot him out of 20 people? That just seems ridiculous to me and frustrating," she said.

For Victor, the road to recovery was riddled with health complications and surgery after surgery. That was until Ophelia says Victor refused to undergo another surgery.

"He just said, ‘I’m tired. My mind, I have my mind. My mind is great, but my body is tired, and I just can’t do anymore,’" his mother recalled.

At 27 years old, Victor spent his final days in hospice and saw his daughters one last time. He passed away on June 17 of this year.

"He kept apologizing to me. Just kept saying he was sorry. I told him he didn’t need to be sorry. It wasn’t him," Ophelia said.

MCAO says a total of three prosecutors have been on the case before its dismissal. Time will tell if Chandler Police submits a new case recommending a homicide charge.

Ophelia and her family will continue to fight for justice.

"Because he fought. He fought for a year and a half through everything," she said.

Booker’s attorney has not made an official comment on this case.

Anyone with information about this case is asked to call Chandler Police at 480-782-4130. More ways to contact the department can be found here.

A Chicago man was visiting Phoenix for the weekend when a fight broke out and he shot a random bystander several times on Dec. 13, police say.