PHOENIX - Arizona's two United States senators are getting behind the effort to free Brittney Griner.

Senators Mark Kelly and Kyrsten Sinema have co-sponsored a resolution demanding an end to the Phoenix Mercury star's five-month detention in Russia.

"Sinema and Kelly’s bipartisan resolution calls on the Government of the Russian Federation to immediately release Griner and urges the United States to continuously press for Griner’s release in all interactions with the Government of the Russian Federation," read a statement from the resolution. "The resolution goes on to acknowledge Griner’s renowned leadership in the LGBTQIA+ community, as well as her continued efforts to provide resources for those experiencing homelessness in the Phoenix area."

Griner was arrested in February at the Russian capital’s Sheremetyevo Airport when customs officials said they found vape canisters with cannabis oil in her luggage. She has been jailed since then, facing up to 10 years in prison if convicted. 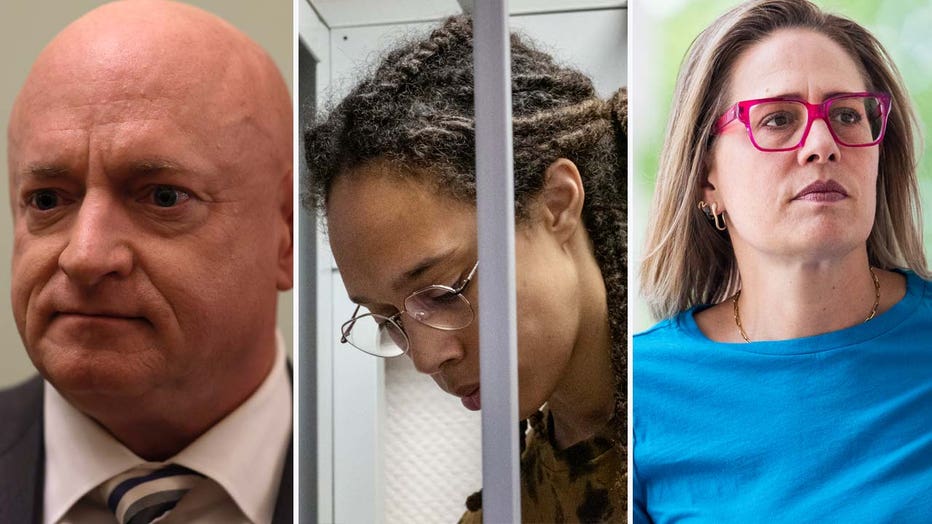 Griner has since pleaded guilty, acknowledging that she possessed the canisters, but said she had no criminal intent and said the presence in her luggage was due to hasty packing.

The Biden administration determined that Griner is being wrongfully detained. Griner’s wife, Cherelle, has urged the president to secure her release, calling her "a political pawn."

MORE: LeBron James critical on his show of US efforts to get Brittney Griner home

"I’ve worked with the State Department to make sure that Brittney Griner’s safe return is a top priority, and this bipartisan resolution shows the Senate’s support for her as well. Brittney Griner is an inspiration to Arizonans and Americans across the country. I’ve had the pleasure of meeting her and seeing her talent on the court up close. The Russian government unjustly detained Brittney and we will keep working with the administration to ensure her safe and swift return."

"Arizonans have love and admiration for Brittney Griner both on and off the court. The Department of State has determined that Brittney was wrongfully detained – it’s past time for her to come home."

The event at the Footprint Center is taking places four months after the WNBA star was detained in Russia. FOX 10's Stephanie Bennett reports.