Latest on the road closures, weather impacts as storm rolls through Arizona

PHOENIX - A storm dropped about a foot of snow in parts of Arizona’s high country Wednesday, hampering travel and closing schools in some areas.

The National Weather Service issued a winter storm warning until 11 p.m. Wednesday for an area stretching from Flagstaff to Show Low and including the Mogollon Rim, the Kaibab Plateau and the White Mountains.

Arizona Snowbowl visitors are reveling amid a winter storm that is piling up inches of snow across northern Arizona. FOX 10's Stephanie Bennett reports.

The Arizona Department of Transportation (ADOT) warned drivers to reconsider traveling up north, but if you can't postpone your trip, bring a winter driving kit. Items in the kit include, ADOT says, "packing plenty of warm clothes and an emergency kit that includes things like a fully charged cell phone, blankets, food and water, medications you need and even kitty litter or sand in case you get stuck in the snow."

Arizona Department of Public Safety officials said there were some slide-offs on Interstate 40 involving tractor-trailers but no serious injury collisions were reported.

Expected maximum snow accumulations into Thursday in higher elevations ranged up to 14 inches (35.5 centimeters). On Wednesday afternoon, Arizona Snowbowl says it got more than a foot of snow in the last 24 hours.

NWS out of Flagstaff says it estimates Sunset Park will see just over an inch of snow, Flagstaff will see about 8 to 12 inches and Kachina Village will possibly see the most with 12 to 18 inches.

Sedona could get 2 to 4 inches, and firefighters there say rescues can be pretty difficult during a storm. They’ve added snow chains to their fire trucks and ambulances in preparation.

"We get a lot of vehicles that drift off the road. Especially in Oak Creek Canyon, the first thing people want to do is get out of their vehicles which causes, you know, issues in itself …" said Jordan Bake, Battalion Chief for the Sedona Fire District.

He adds, "Try to recommend that individuals stay off the roadways. Giving you know as much notice as possible that this storm is coming in. Avoid some of those unnecessary slide-offs but if you do find yourself in that situation, we ask obviously you have a fully charged cell phone to get ahold of somebody for assistance, make sure you have some warm blankets, some water in case we’re unable to get to you and stay in your vehicle."

There will be dangerous winter road conditions over the next few days along I-17, I-40, and highways 87 and 191. ADOT says they have 200 snowplows across the state, 150 of them are in northern Arizona – about 65 to 70 are in Flagstaff alone.

"The safest option is to let the storm pass and give our snowplow operators a chance to clear the highways clear the roads," says Ryan Harding with ADOT. The storm is predicted to last into Thursday, but the worst time to travel was Tuesday night into Wednesday morning.

"Not only can conditions change very rapidly, which can be dangerous when you’re traveling, but it also less cars on the roads or vehicles gives our plow drivers just a chance to clear the roads more quickly and more efficiently when there’s not a bunch of traffic built up on the highway," Harding added.

"All City of Flagstaff non-essential services will operate on a two-hour delayed start tomorrow morning, Feb. 24, due to inclement weather and poor road conditions," the city said.

Northern Arizona University closed its campus at 3:45 p.m. on Wednesday and will have a delayed start on Thursday. The campus, along with its offices, will open at 10 a.m. and any classes that begin before that time are canceled.

Morning buses will run two hours later than normal. "Parents and guardians in Kachina Village, Mountainaire, and Munds Park should bring their children to the alternate winter weather bus stop," the district added.

The Blue Ridge School Districts says all schools and offices will be closed Thursday. 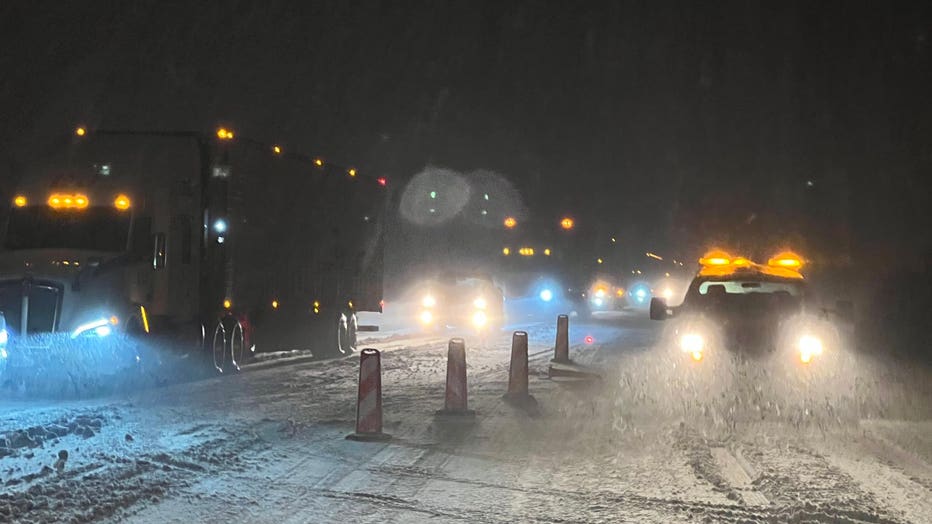 Snowplows trying to clear I-10 near Ash Fork

In the Phoenix area, the National Weather Service (NWS) says after a rainy Wednesday, a round of light showers will continue into the Phoenix metro area, but to expect little to no rain.

Parts of north Scottsdale saw snowfall Wednesday morning. Troon North Golf Club was blanketed in fresh snow, putting a damper on golfers who came to Arizona to play in the sun and warm weather.

A little further north in Carefree, it snowed enough to form a thin layer on the ground.

"These areas – most are over 2,000 feet many 2,500 feet, so every couple of winters they can get a little bit of snow, including today," says Marvin Percha with NWS Phoenix on Wednesday. The snow flurries didn’t stick around for long.

The last time snow was seen in Scottsdale was January 2021. In February 2019, parts of Scottsdale saw a few inches of snow that actually stuck to the ground.

As weather develops, we will continue to update this story. The Associated Press contributed to this report.

Sunny and cold today in the Valley with a high near 59°F.

SkyFOX captured fresh snowfall on Arizona's beautiful Superstition Mountains on Feb. 23 as a storm rolled through much of the state.

Winter storm hits Arizona with rain in the Valley, snow in high country