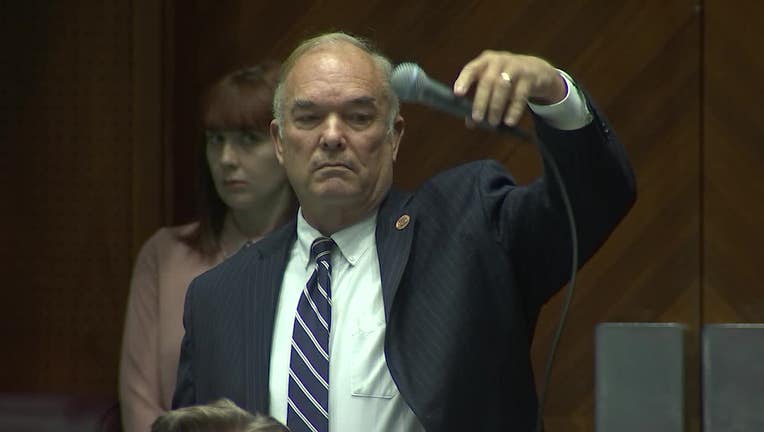 PHOENIX - The Arizona Supreme Court on Wednesday dismissed part of a defamation lawsuit filed by a former legislator who was expelled by the state House in 2018 for sexual harassment but ruled that a remaining part of the case can move forward.

The ruling came in ex-Rep. Don Shooter’s lawsuit against former House Speaker J.D. Mesnard, a fellow Republican who currently is a state senator.

The Supreme Court ruled that Mesnard has legislative immunity against the part of Shooter’s lawsuit alleging Shooter was defamed by Mesnard’s release of a investigatory report but that Mesnard doesn’t necessarily have immunity for allegedly defaming Shooter in a news release.

The remaining part of the case now goes back to a trial court to consider whether Mesnard was authorized to issue the news release and whether "exercising such authority constituted a legislative function subject to absolute immunity," the court stated.

Four justices either authored or concurred in the court’s opinion and a five agreed with its result. Two other current or former justices recused themselves from the cases.

At the time of his ouster from the Arizona State Legislature in 2018, Shooter is believed to be the first state lawmaker in the U.S. to be expelled from his seat since the #MeToo movement against sexual misconduct began in 2017. The fallout came months after State Rep. Michelle Ugenti-Rita (R) said Shooter propositioned her for sex and repeatedly commented on her breasts.

In the weeks following State Rep. Ugenti-Rita's accusation, Mi-Ai Parrish, a woman who once worked as the publisher of the Arizona Republic newspaper, also complained about inappropriate behavior and comments by Shooter.

Parrish, who is Asian-American, wrote in a column online that Shooter told her during a meeting in his office that he had done everything on his "bucket list," except for "those Asian twins in Mexico."

Shooter said at the time that his actions did not justify expulsion.

The Yuma County Board of Supervisors eventually picked Tim Dunn to replace Shooter in State Legislative District 13, which runs from the Buckeye area to portions of Yuma County.

Shooter later filed to run for State Senate in Legislative District 13 in 2018. According to official election results from the Arizona Secretary of State's Office, Shooter came in last in the three-way GOP primary race, losing out to Brent Backus and Sine Kerr, who won the primary and later won the general election matchup against Democrat Michelle Harris.

As of 2021, Dunn is still a State Representative for Legislative District 13.