A look back at Arizona's 2022 monsoon season

This year's monsoon season was certainly an active one, with plenty of storm damage across the Phoenix metro area and beyond. FOX 10's Anita Roman recaps some of the wild weather moments this year.

PHOENIX - This year's monsoon season was certainly an active one, with plenty of storm damage across the Phoenix metro area and beyond.

Here's a look back at some moments from this summer's wild weather:

The grocery store is located in the area of 75th Avenue and Thunderbird, and fire officials say the collapse may have been caused by storms. FOX 10's Anita Roman reports.

Taylor Daml shared this video of a palm tree on fire after it was struck by lightning during monsoon storms on Aug. 3.

One of the biggest storms of the season hit the Phoenix area on Aug. 12, and one woman even had to be saved from rushing floodwaters in Scottsdale during this storm.

FOX 10 photojournalist Brian Kae took drone video of the aftermath of a monsoon storm that caused heavy flooding at Eldorado Park in Scottsdale on Aug. 12. 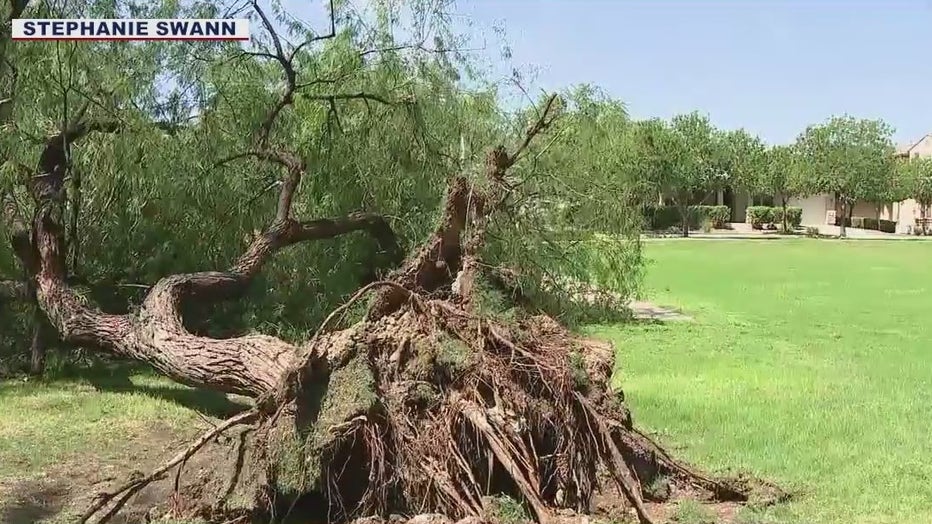 On Aug. 17, heavy rains and strong winds uprooted several trees in the Buckeye neighborhood of Verrado.

"The microburst was crazy," said Stephanie Swann, who lives in the Verrado area of Buckeye. "I was talking to some people, and they said 'was that a tornado?' I said 'I don't think so.'"

While the outdoors were littered with toppled trees, stormwater made its way indoors at some homes.

"The wind was blowing so hard, it was hitting the windows straight on and coming through the windowsill," said Swann. "We were putting towels around. It was quite a storm."

Monsoon 2022: Flagstaff couple stuck in home in the aftermath of flooding

An elderly couple in Flagstaff has been trapped in their home for weeks, as successive rounds of flooding in the area have created a thick wall of mud that is surrounding their home. FOX 10's Marissa Sarbak reports.

The flash floods have damaged homes and other properties, leaving residents with not only a mess to clean up, but also headaches, as they deal with insurance matters.

Dust storms in the east Valley

Almost 24 hours after a late night storm, parts of the East Valley felt the power of the monsoon once again, as a storm brought a big wall of dust to the area. FOX 10's Marissa Sarbak reports.