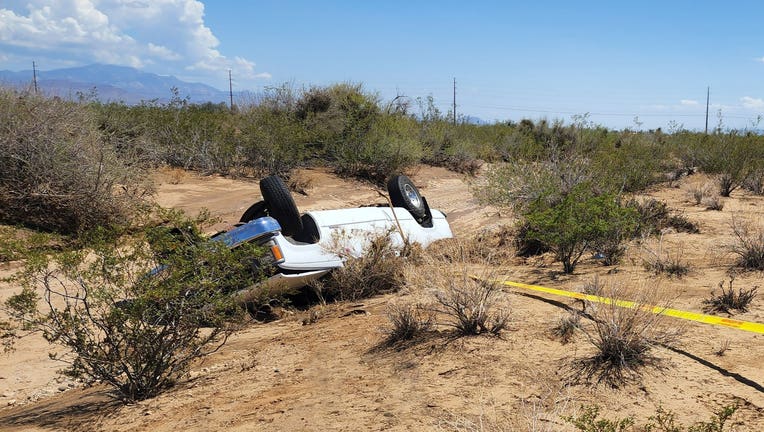 Authorities say a body was found on Aug. 1 in an overturned truck that had reportedly been swept away in floodwaters in Golden Valley. (Mohave County Sheriff's Office Search and Rescue)

GOLDEN VALLEY, Ariz. - Authorities say a body was found Monday in an overturned truck that had reportedly been swept away in floodwaters in Golden Valley.

The Mohave County Sheriff's Office Search and Rescue says someone who was riding an ATV in a wash called them to report that they saw an upside-down Chevrolet truck with a body inside.

Deputies responded to the scene near Chino Drive and San Pedro Road and recovered the male victim, who's identified as John Craig Johnson, 69, of Golden Valley.

Investigators say the truck had been swept down the wash on the night of July 31 during a monsoon storm.

"There were multiple calls of vehicles reported that night, but no reports of a vehicle at this location," the sheriff's office said.

The National Weather Service reported that more than an inch (2.5 centimeters) of rain fell in 15 minutes Sunday near Kingman, which is 11 miles (17.7 kilometers) east of Golden Valley.

The sheriff's office reminds everyone to not enter flooded roadways.