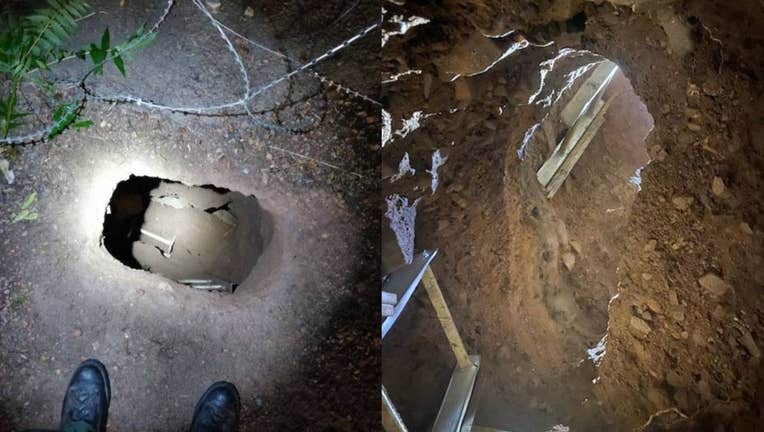 Nogales Border Patrol agents located the tunnel west of the DecConcini Crossing on December 8, 2019. This was the 125th border tunnel found within the Tucson sector since 1990. (U.S. Customs and Border Protection.)

NOGALES, Ariz. - Another border tunnel from Mexico to the United States has been discovered in Arizona after the U.S. Border Patrol arrested four migrants.

Agents in Nogales, Arizona, found the tunnel on Sunday after a camera operator for the Border Patrol spotted the migrants.

The agents who made the arrest traced the migrants’ trip and came across the tunnel from Nogales, Mexico to Nogales, Arizona.

It was just 50 yards (46 meters) away from another tunnel discovered last week, although that one was incomplete.

"Mexico’s Policia Federal subsequently located the tunnel’s entrance in the floor of the existing Grand Avenue Drainage System in Mexico. The tunnel followed the footer of the International Boundary Fence at a depth of about 10 feet, crossed beneath it, and came up approximately 5 feet north of the fence," stated U.S. Customs and Border Protection officials.

The Border Patrol said it worked with Mexican authorities to trace the tunnel to Mexico and has since destroyed it.

This was the fifth tunnel discovered this year in the Border Patrol’s Tucson Sector, which covers large areas of Arizona. According to CBP, this was the 125th tunnel found in the Tucson Sector since 1990.