The Phoenix Police Department is recommending charges against two officers who were recorded kicking and hitting a man while he was on the ground.

PHOENIX - New video from an arrest that's now the subject of an administrative and criminal investigation has been released by the Phoenix Police Department.

The arrest at a QuikTrip convenience store near 59th Avenue and Buckeye Road happened on October 27, and we need to warn you that the video is graphic.

"Surveillance video showed as the patrol car starts to back out of the parking space to respond to a call for service, the man pulls out a handgun. A shot goes off and into the ground. The man then points the handgun at the officers in their car and fires one more shot. The bullet struck the patrol car's spotlight and went into the driver's side ‘A’ pillar. The man then runs into the occupied store, still holding the firearm," stated officials in their critical incident report.

Body camera video shows officers rush into the store with their guns drawn, ordering the man, identified as Harry Denman, 38, to the ground. The suspect put his hands in the air, and then they take him into custody. 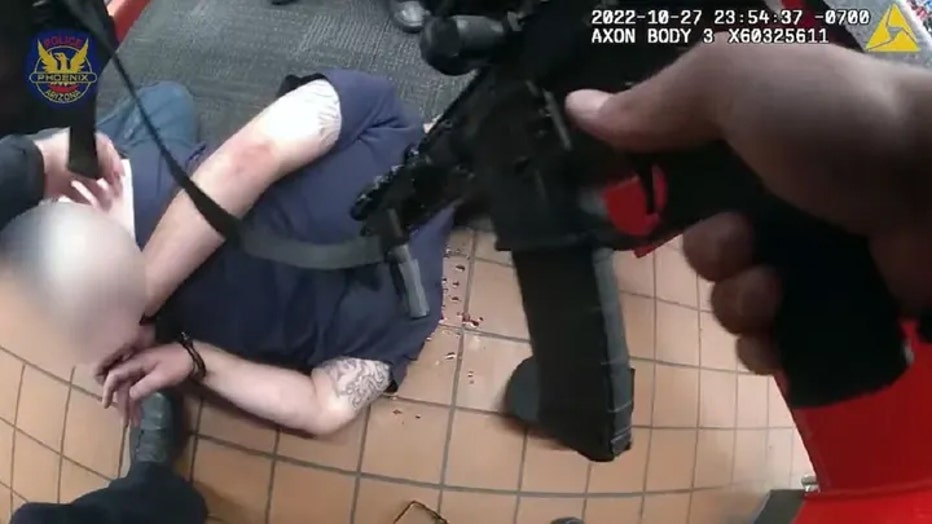 One of the clerks from the store recorded video of the arrest, which shows two officers stomp on the suspect's head as he was getting down on the ground. At another point, you could see them hit the suspect with their guns.

The suspect was transported to an area hospital before being booked into jail. A judge set a $5,000 bond for Denman.

The names of the officers have not been released, but police say they are assigned to the South Mountain Precinct. "One of the officers has 6 years on the department. The other officer has less than 1 year on."

"At the time the incident occurred I promised a complete and thorough investigation. That investigation has been completed and has been turned over to the Maricopa County Attorney’s Office with the recommendation for charges.

Police officers must be held to a high standard of excellence and when we fall short, must be held accountable. I have confidence in the legal process and will allow it to play out in an unbiased manner.

Both officers remain on administrative leave."

Harry Denman, 38, is accused of firing gunshots at a police car while two officers were inside near 59th Avenue and Buckeye.