Cincinnati fans jumped and cheered in celebration on January 30 after the Bengals pulled off a major comeback in the AFC championship game to stun the Kansas Chiefs 27-24 in overtime, earning them a place at the Super Bowl. (Credit: Jason Wilcoxon via Storyful)

The "it’s not delivery" frozen pizza company said the contest centers on pie — both pizza and pi, the mathematical constant that is approximately equal to 3.14159.

How to win free DiGiorno pizza during Super Bowl LVI

Super Bowl LVI, in which the Cincinnati Bengals will take on the Los Angeles Rams, is scheduled for Sunday, Feb. 13, 2022.

If the score — at any point of the Super Bowl — is 3-14 (or 14-3), DiGiorno says it will give away free pizza to lucky fans who enter the contest online here. Individuals can enter between Feb. 6 and Feb. 13 for a chance to score the free pie.

Those who will receive a coupon redeemable for free DiGiorno pizza. 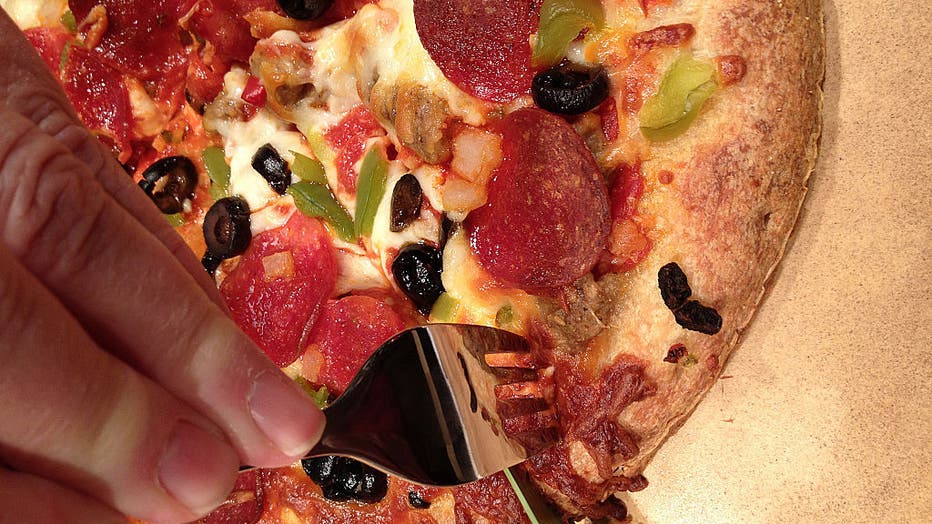 If any of these pi-worthy instances take place during the Super Bowl, one lucky fan per prop will be chosen at random to win free pizza for the 2022 pro-football season — which equates to 267 pizzas, the company said.

• Any player finishes the game with exactly 314 passing yards
• More than 3.14 total turnovers in the game
• Any scoring drive takes exactly 3 minutes and 14 seconds

What time is the Super Bowl?

Where will Super Bowl LVI be played?

Super Bowl LVI will take place at SoFi Stadium in Inglewood, California — the home of both the Rams and the Los Angeles Chargers. For those going to the big game, here’s a list of things to do during Super Bowl week in Los Angeles.

Super Bowl LVI: Everything you need to know

Dr. Dre, Snoop Dogg, Eminem, Mary J. Blige and Kendrick Lamar will perform during the Pepsi Super Bowl LVI Halftime Show. A trailer released last month features all the performers getting the call and preparing to head to the halftime show at SoFi Stadium in Inglewood, including Eminem going face-to-face with his alter-ego Slim Shady.

"The opportunity to perform at the Super Bowl Halftime show, and to do it in my own backyard, will be one of the biggest thrills of my career," Dr. Dre said in a previous statement. The seven-time Grammy winner added that their halftime performance will an "unforgettable cultural moment."

The 2022 performers will join a list of celebrated musicians who have played during Super Bowl halftime shows of the past, including Beyoncé, Madonna, Coldplay, Katy Perry, U2, Lady Gaga, Michael Jackson, Jennifer Lopez, Shakira and last year's performer, The Weeknd.

This story was reported from Cincinnati. Chris Williams contributed.