Dog rescued off Arizona mountain cliff after community, owner come together to save 'Goldie'

Goldie was rescued by a group of concerned animal lovers and her owner after she chased javelinas a little too far and got stuck on a mountainside. She was stuck for days until her dangerous rescue.

YAVAPAI COUNTY, Ariz. - A northern Arizona man is happy to be reunited with his dog after quite the mountain rescue.

Goldie the Labrador mix was stuck on Sugar Loaf Mountain for days until rescuers managed to find her and safely guide her down.

"So people had seen it on the cliff and called them, and we were just on it from there," said Katrina Karr, "president, founder and lead trapper for the Yavapai Humane Trappers Animal Search and Rescue Team.

It was a dog rescue like no other. Goldie had managed to get herself stuck on a narrow ledge, and Karr was on the case, posting for additional help on Facebook.

"The post went viral. I mean, it was shared all over the place. We were getting hundreds and hundreds of messages from people that had the experience and wanted to help, and it was amazing," Karr said.

Soon after seeing the post, Goldie's owner had reached out to Karr. "About 10:30 at night, we got the call from a man named Robert saying, ‘Hey, I think you found my dog,’ and so we talked, and he described her collar, and it was her. It was Goldie."

Karr says the owner had lost Goldie days ago after chasing javelinas. "Goldie and their other dog took off after some javelinas and then like an hour after that, their other dog came back but Goldie didn’t. She just got stuck up there and was scared to come back down," Karr said.

As night fell, they made the tough decision to leave Goldie until morning, lowering down some food and water. The next morning, about 15 people from different organizations came out to help, but ultimately it was her owner who risked his life, climbing up to her rescue.

"It went smooth. She was happy to see her owner," Karr said.

Karr says this actually wasn’t the hardest dog rescue they’ve encountered, all thanks to everyone who showed up. But it’s definitely one of the most memorable. 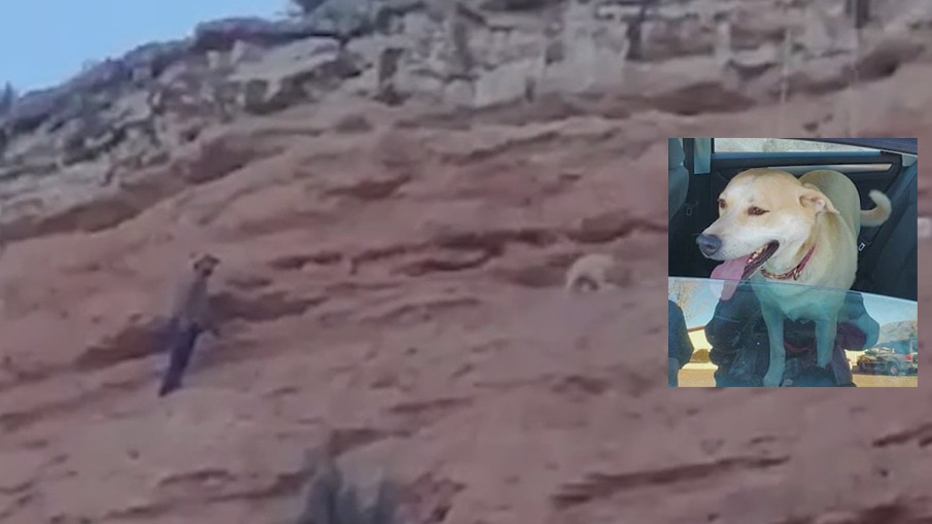