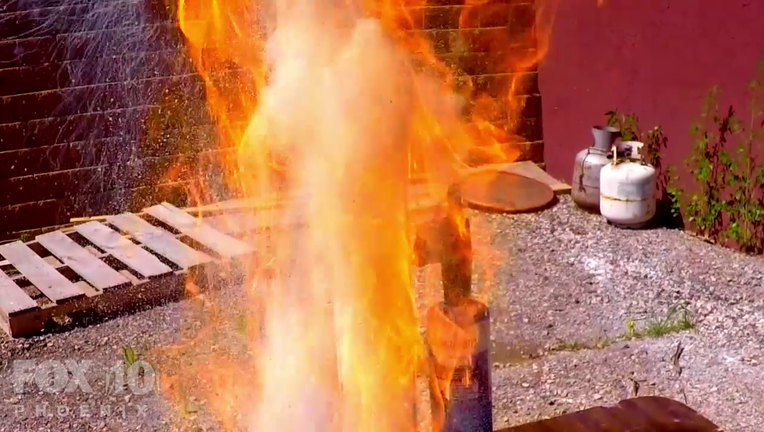 There's a serious fire danger people may not be aware of. It is sometimes called "explosive dust", and a man who who fell victim to this threat is extremely lucky to be alive and talking about it.

"There was, like, three-foot flames coming off my body," said Kyle Flicker.

Late last year, Flicker was grinding rubber material on a lathe, when a small fire started. Some embers were sucked into a ventilation system, which carries dust particles outside the main building. When Flicker went to check, a huge explosion filled the air with flame, turning him into a human torch.

A co-worker managed to reach in, and drag Flicker out.

"I didn't know that this rubber dust was combustible," said Flicker. "I mean, if I would've known that, I would've never went in that room."

That lack of knowledge, according to the U.S. Chemical Safety Board, is all too common.

In 2003, six workers were killed, and 38 hurt, when rubber dust exploded at a pharmaceutical plant in North Carolina.

Five years later, 13 people were dead and 40 hurt, when a dust explosion ripped through a sugar mill in Georgia.

Explosions can happen when air, mixed with fine particles, has a trigger, like a spark or flame.

Any material, even coffee creamer, can be an explosive hazard.

"I was thinking, 'holy crap'," recounted Flicker. When he opened the door to go into that dust collection room, it allowed air to stir up fine particles of rubber. The ember he tried to remove from a vent provided the spark.

"It's been a long, hard road, that's for sure," said Flicker. "I just want to get back to a normal life, basically."

Flicker is now suing five companies that supplied the rubber material he was working with, claiming they had reason to know of the explosive dust danger, but didn't offer any kind of warning.

Flicker, unfortunately, has been unable to return to work, and he spends many of his days in physical therapy.