Electrical pole in Ahwatukee neighborhood catches fire during storm: 'Never seen anything like it'

PHOENIX - Storms rolled through the Phoenix area on the night of Monday, March 28, with more wet weather on the way, and it caused quite the damage in some neighborhoods.

It turned into an electrifying night for an Ahwatukee neighborhood after an electrical pole went up in flames during a storm. Greg Decori, a neighbor in the area, says "It’s the most activity I’ve seen in the street in twenty years."

He adds, "I was in my office, windows open, nice day and I smell something, and I’m like, ‘what is that? what is that smell?’ We come out and this pole here was completely engulfed in flames. I’ve never seen anything like it before and then the transformer blew ten minutes into it. A couple really big explosions."

To the neighborhood's relief, fire crews were quick to respond, extinguishing the flames.

The cause is still not determined, and neighbors say lightning was not the cause, but possibly a faulty wire that came loose from the wind and rainwater made it spark.

"We just go in and make sure that the power is still not connected and running through those lines and then obviously we deal with the flames themselves on this," explained Capt. Evan Gammage with the Phoenix Fire Department.

Almost 800 customers in the area lost power and internet while crews worked to get services restored.

The Phoenix Fire Department says it can get busy during storms like these, mainly responding to downed power lines, car accidents from slick roads, and sometimes during flash flood water rescues.

For now, neighbors are shocked the incident wasn’t much worse.

"Literally, we’ve never seen anything like it. It wasn’t just a little fire, it was raging all the way to the top so really, really crazy," Decori said.

It’s always a good idea during these types of storms to bring in any furniture or trash cans that could blow around. You're also advised to take it easy on the roads because they will be slick with puddle accumulation in those lower-lying areas. 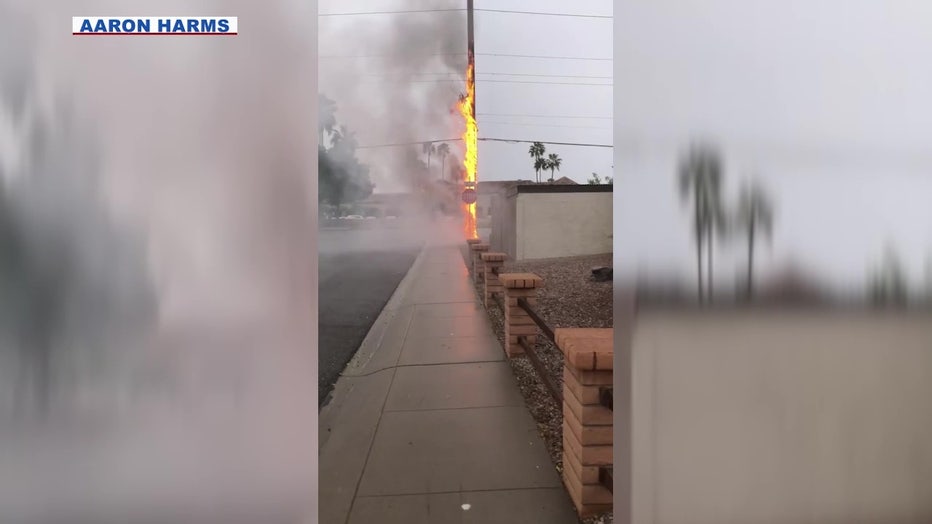 The Arizona Department of Forestry and Fire Management says a wind-driven fire has grown to 2,000 acres as of March 28 near Sasabe in Pima County, close to the Mexico border.