The two cases happened in Yavapai County and Mesa, and both happened just days apart. In both cases, witnesses say a gust of wind carried lifted the bounce house into the air.

PHOENIX - On two occasions in May, strong winds lifted bounce houses in Arizona, while children were playing inside.

Many these kids were badly hurt, and some are still in the ICU.

The two incidents happened in Mesa and Paulden, a town north of Prescott. They happened less than a week apart from one another. In both cases, family members say they had the bounce houses staked to the ground. All say it happened very quickly, and there wasn't much they could do.

"It was out of anyone's hands. I have never seen something so traumatizing in my life," said Ashley Pedrin, who witnessed the incident that took place in Paulden. "A dust storm developed and just swooped the whole bounce house with it. Flew about 25 feet into the air. Tumbled."

The bounce house landed in the neighbor's yard. Two girls, identified as 6-year-old Layla Bourne and 7-year-old Arlene Romero, were trapped inside.

"We pulled the girls from the bounce house, tried to keep them calm once they awoke from being knocked out," Pedrin recalled. "Just seeing them like that is something you never forget. You don’t want to see anybody’s child like that."

Layla and Arlene are out of the hospital and back at their homes. Layla is recovering from a broken pelvis femur and fibula, while Arlene suffered severe neck and back injuries.

"Really blessed for all the donations and prayers and people that have reached out so far," said Pedrin. "We are extremely touched on both sides of the family." 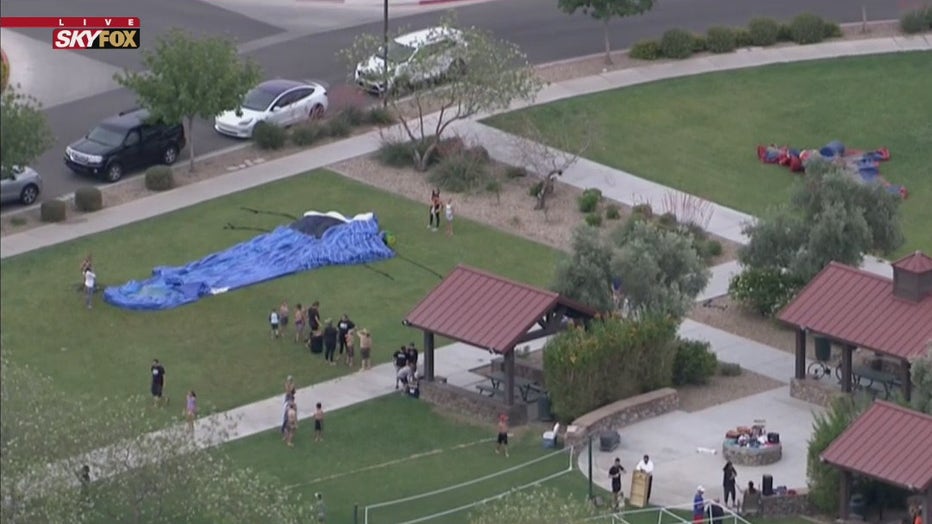 On May 20, a similar thing happened about 100 miles away from Paulden, in Mesa.

Related: 4 children hospitalized after bounce house blows over in Mesa

According to the Mesa Fire Department, the bounce house was uplifted by a strong gust of wind and reported by witnesses to have gone several feet into the air during a party at a park near Val Vista Drive and Brown Road.

Several kids were inside this bounce house when the incident happened. In this case, the bounce house soared about 15 feet into the air.

In this incident, four kids were taken to the hospital. Lee's son has a broken tailbone, but is expected to be released in the next couple of days.

(Click here for GoFundMe set up for Paulden incident victims)

(Click here for GoFundMe set up for Mesa incident victims)