Fire crews responded just after midnight on April 21 to the apartment complex, which is located near 51st Avenue and Indian School Road.

PHOENIX - A man is in extremely critical condition after he was pulled from a burning apartment in Phoenix.

According to the Phoenix Fire Department, crews responded to a fire just after midnight on April 21 near 51st Avenue and Indian School Road and found a two-story apartment complex with heavy smoke and flames coming from a first-floor unit.

As firefighters searched the burning apartment, they found a man and got him out of the apartment. He was transported to a hospital in extremely critical condition.

A second man was able to safely exit the apartment on this own before firefighters arrived at the scene. 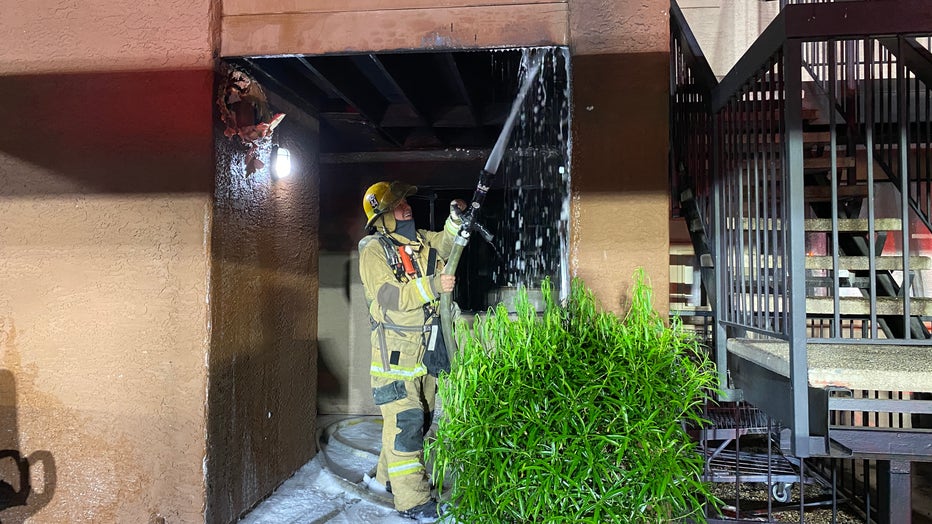 A woman in her 30s was injured when she jumped from a second-floor apartment to the ground to escape the fire. She was treated at the scene but refused ambulance transport.

"We had a neighbor in the unit above that she saw the flames. She jumped off the second floor to the ground floor and she did have some lower leg extremity injuries and she was also taken to the hospital," said Phoenix Fire spokesman David Ramirez.

Firefighters were able to prevent the fire from spreading to nearby apartments.

One person is displaced due to the fire and the cause of the fire is under investigation.

"It’s kind of hard remembering. All of it happening at once," said Michael Stapleton, recounting what happened at the scene.

Stapleton lives next to where fire was burning. He said he ran out to the roommate who got out, using a hose.

"He was kind of standing right here, spraying it in there," said Stapleton. "I couldn’t get too close, to be honest with you. That’s how hot it was."

Stapleton later ran back to get a fire extinguisher and gets his dogs out.

"The upstairs neighbor, she like swan-dived off the balcony to get away from the stuff," said Stapleton. "I don’t know if the fire spread to her, but she was definitely scared."

The fire may be over, but neighbors were still in shock.

"Witnessing that was a sad sight. I tried to help the other roommate out as much as I could," Stapleton said, talking about the moments after firefighters found a victim inside the unit that burned. "After everything was done, I took a shower and I just sat there for an hour thinking about everything."