PHOENIX - Arizona Governor Doug Ducey signed a bill in 2021 legalizing test strips that can detect fentanyl in drugs as the state has a front-row seat to the opioid crisis and the wave of fentanyl pouring into the country.

Law enforcement says the southern border is the gateway.

A spokesperson for the Arizona Department of Health Services says a $100,000 federal opioid grant was key to delivering fentanyl test strips to several participating counties. The purpose of the strip is to be an overdose prevention tool, a lifesaver for those who do use drugs.

"When I get to the hospital, they tell my parents, ‘We can’t keep his heart going. We don’t know what he took, and you should get his affairs in order, and it doesn’t look good,’" Baker said.

He knows he used heroin that night and believes it was laced with fentanyl.

Baker is a former football player who says he relied on painkillers and fell into drug and alcohol addiction.

"I had met my match and I had been defeated, but I was so detached from reality at that point. That the only thing I knew how to do was to try to run away from this emotional feeling as quickly as I could. So in 24 hours from being out of the hospital, I was back to getting high," he said.

After waking up from a week-long coma, Baker started an up-and-down months-long journey to sobriety. He moved from Massachusetts to Arizona where his life changed and he ultimately got clean.

"I stopped searching that as my solution, you know, drugs, alcohol, when I found true purpose for my pain," he said.

The fentanyl crisis, so far

How effective is fentanyl? Fifty to 100 times stronger than morphine.

65% of those deaths happened in Maricopa County over those two years, totaling 2,170. 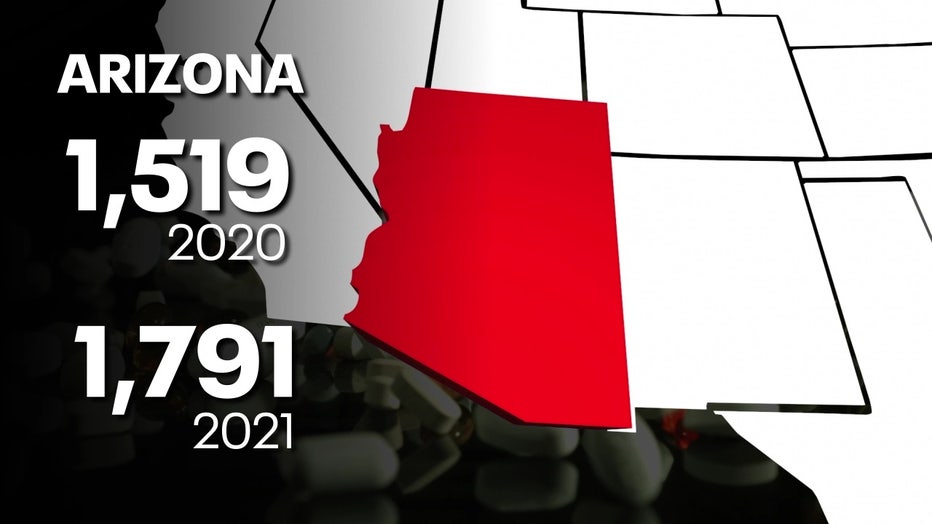 Between 2020 and 2021, synthetic opioid overdose deaths in Arizona increased.

Fentanyl is ‘headed all over the place’

Constant traffic stops are leading to mounds of fentanyl pills hidden in bags, suitcases or behind car parts.

"The larger quantities, we notice them on the I-10 in the Tucson area or the Casa Grande or the area in between there," Gastelum said.

The drugs are mainly being trafficked across the border from Mexico, he says, and Arizona is not the only destination.

DPS is seizing more fentanyl than ever despite the department’s sworn personnel being short by at least 315. The largest shortage since 2018. 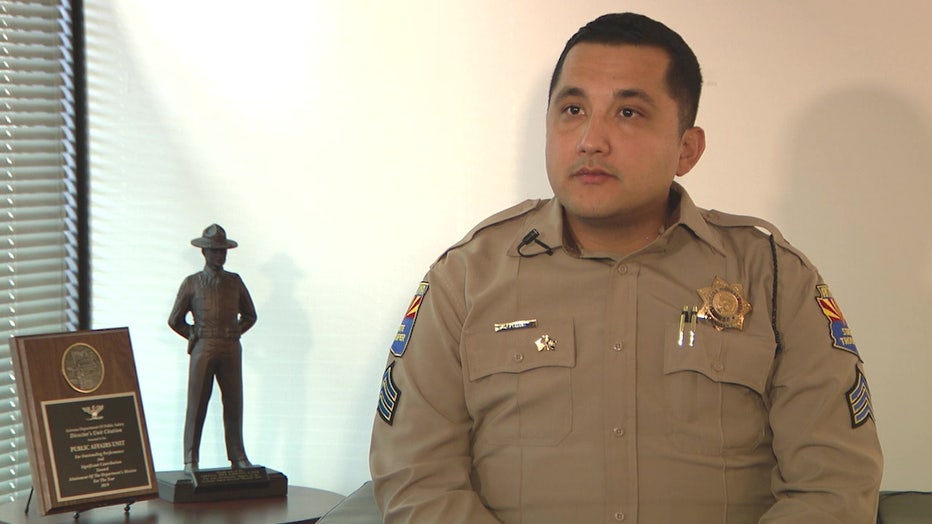 "People that are going out doing recreational cocaine on the weekend or buying that Xanax or buying that one Percocet, a simple swab can show you that, ‘Hey, if you’re completely naive to opiates, that this is going to stop your heart and kill you,’" Baker warned.

He volunteers with the Aris Foundation, a nonprofit organization helping the homeless. The work starts in a warehouse and on Tuesday nights, his team will pass out clothes, toiletries and other resources.

Baker has been working with the state’s department of health services to get batches of fentanyl test strips consistently.

"If we don’t utilize those resources, then the problem’s only going to get worse," he said.

Adrian Pittington is the lab manager at Sonictest Labs where we were able to see how the test strips work.

"A line being there most of the time means negative on almost every test I’ve seen. A line being absent means positive," he said.

In just minutes, we were able to determine a sample of oxycodone is fentanyl free.

The lab manager says testing for fentanyl is something many employers are requesting these days.

"Probably the most surprising change was all of a sudden everybody started asking me to test for fentanyl," Pittington said.

Baker continues to request more test strips and Narcan to keep those battling addiction alive, so he can make a life-changing connection.

So far, the state has distributed test strips to six counties: Pima, Coconino, Mohave, Cochise, Navajo and Yavapai. Maricopa County Public Health is currently working with the Centers for Disease Control and Prevention for funding to make the test strips widely available in Arizona's most populous county.

The U.S. Drug Enforcement Administration has announced the seizure of more than 8 million fentanyl pills in Phoenix as part of a nationwide operation spanning over three months.

Phoenix Police say Francisco Delgado and Jose Quinonez were arrested after more than one million fentanyl pills were found inside Delgado's truck during a traffic stop.

Agents found 340 packages filled with 187 pounds of fentanyl pills on I-8. The drugs have an estimated value of $4.3 million.

'It is more terrifying now than I’ve ever seen': DEA agents needed amid spike in meth, fentanyl trafficking

The DEA is looking to hire thousands of new agents across the country and is hoping to get the upper hand in the war against drugs and help save lives. This comes as the number of drugs, specifically, meth and fentanyl, flooding into our country, reaches record levels.