PHOENIX - Governor Doug Ducey has ordered flags at all state buildings to be lowered to half-staff in honor of the firefighters from Prescott who died in the Yarnell Hill Fire in 2013.

On June 30, 2013, 19 elite firefighters known as members of the Granite Mountain Hotshots were killed battling a wildfire northwest of Phoenix after a change in wind direction pushed the flames back toward their position.

Ducey called it was one of the most tragic days in state history.

“The brave Yarnell 19 had their whole lives ahead of them,” the governor said. “They had families, loved ones and friends who cared deeply about them. They knew the dangers of their job, but they did it anyway, with courage and an abiding sense of duty and commitment to our communities.”

Ducey offered his prayers to the families of the firefighters and said the crew’s sacrifices will be forever remembered and honored. 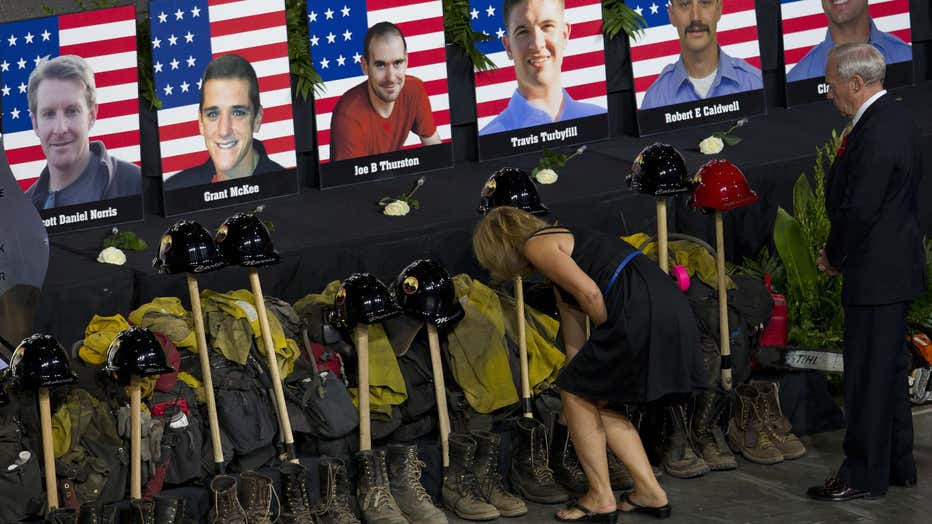 PRESCOTT VALLEY, AZ - JULY 9: Photos of some of the 19 fallen firefighters line the front of the stage before a memorial service at Tim's Toyota Center July 9, 2013 in Prescott Valley, Arizona. The fire gear is not from the firefighters who died. The

A tribute to the firefighters will also be posted on the Yarnell Fire District's Facebook page.