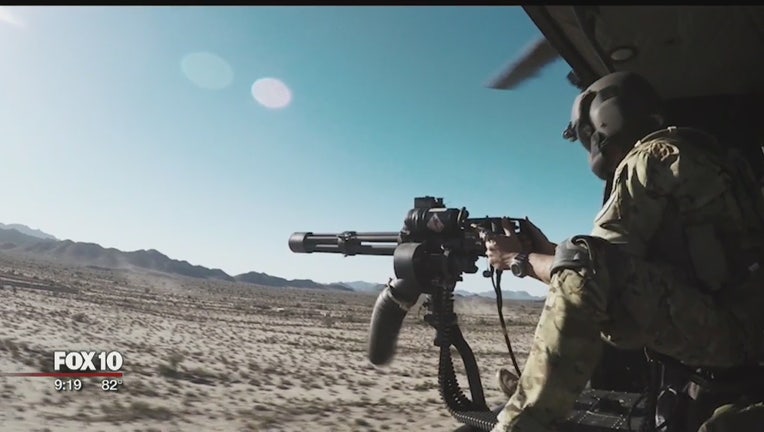 MARICOPA, Ariz. (KSAZ) - A remote area west of Maricopa was the ideal retirement spot for a few Arizona land owners.

That was until they realized what was happening nearby.

For years, they say they had no idea one of their neighbors was a Scottsdale-based weapons manufacturer that used the land as a shooting range for high-caliber weapons and helicopter mounted machine guns. But as the company moved forward with plans to expand, they were met with fierce opposition.

Their mini-gun can shoot 3,000 rounds per minute -- that's 50 rounds a second. And Scottsdale-based Dillon Aero tests those weapons with customers on this sprawling remote range. They have scooped up more property to expand their business, but there was one big problem.

Carla Lee is one of handful of property owners who are now surrounded by the company's property. She bought many years ago when the market was high and before Dillon Aero bought up the surrounding land. She did't visit too often, but planned to eventually build a spot to retire.

"I was attracted to the solitude and the immense beauty," she said.

But on one recent visit to her property, a helicopter circled overhead -- unmistakable as it flew over the range in the distance.

"I bought high, so I was planning on sucking it up and just building out here as were the other landowners who bought high, but this is not a usual risk to have a mini Afghanistan in the front yard."

Lee says when she bought the property, she didn't know about the shooting range.

The shooting is located down this range and the landowners say there was nothing alerting them to the range. Only recently did the company install a sign warning them of a shooting range ahead.

When Dillon Aero bought the new land and worked to get the property re-zoned, all the landowners realized what had become of their land.

"I can't use it. I can't build on it. My retirement plans are gone. My retirement is tied up in this and they want to purchase it for a fraction of the cost which would keep me from recreating this anywhere else," said Lee.

Lee is not alone. She and the other landowners took their concerns to the Maricopa County Board of Supervisors in early October.

"I was going to build. I had plans for a home out the there and now? I am not willing to live in a war zone," said Joanne Lassell. She had a run in once with the company's helicopter when she was checking on her property and driving on a public road.

"Suddenly there were two helicopters circling the vehicle above," she said. "A gentleman got out of the Huey.. he was in military garb, we could see the Gatling gun in the helicopter and we thought, oh what have we gotten ourselves into? He comes running over the vehicle and says you need to leave the area immediately."

At a meeting earlier in the month, the board agreed to postpone a vote on rezoning Dillon Aero's land and during that time, the company told us they were working with the landowners to reach an agreement to buy their property -- that they always adhere to strict safety guidelines and that getting the property rezoned allows for the implementation of a foreign trade zone that is necessary to timely meet our military's needs.

Lee says she doesn't oppose the company's mission. She just wants to be able to walk away from her property without losing her retirement.

"They are the only one who would ever buy it. We would have to disclose this and nobody in their right mind would ever want to buy here," she said.

It appears the negotiations worked out and news came at last week's board meeting.

Terms of the deal for Dillon Aero to buy the land from the property owners were not disclosed.