COTTONWOOD, Ariz. - A Mexican man was arrested after police seized 100,000 fentanyl pills during a traffic stop in Cottonwood.

K-9 Duke was assisting Cottonwood Police on a drug investigation along Interstate 17 on Sept. 29. During the investigation, multiple traffic stops were made and during one of the stops, police say evidence of drug trafficking was identified.

A search of the vehicle revealed a large duffel bag containing 100 individual bags filled with 100 pills each.

"During further examination of these pills, they were confirmed to be approximately 100,000 fentanyl pills," police said in a news release. 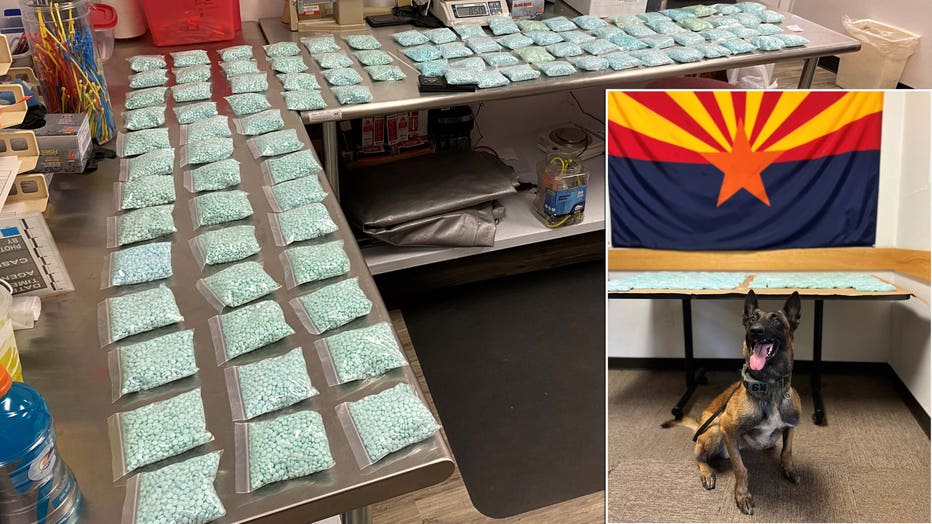 K-9 Duke helped police find 100,000 fentanyl pills during a traffic stop in Cottonwood. The driver of the vehicle was arrested. (Cottonwood Police Department)

The driver of the vehicle, 32-year-old Pedro Martinez-Perez, was arrested and booked into Yavapai County Jail. He is accused of multiple drug charges.

"This is now 'wash, rinse, repeat’ for many Arizona police departments," Cottonwood Police Chief Steve Gesell said. "When 70% of deadly fentanyl enters our Country through Arizona’s southern border, it’s not surprising that agencies across our state continue to make large fentanyl seizures. We believe the vast majority of what our officers interdict is destined for final destinations throughout the Country and beyond. There is no doubt lives were saved when you take 100,000 pills off the street. Its estimated around 40 percent contain a potentially lethal dose for most humans. We simply have to do more to stop precursors primarily produced in China and shipped to Mexican cartels from making across our border. Though this latest seizure is significant, law enforcement is intercepting a small percentage of what’s entering the United States and killing so many  Americans. Its alarming, sad and frustrating and it has to change."

K-9 Duke helped police find 100,000 fentanyl pills during a traffic stop in Cottonwood. The driver of the vehicle was arrested. (Cottonwood Police Department)