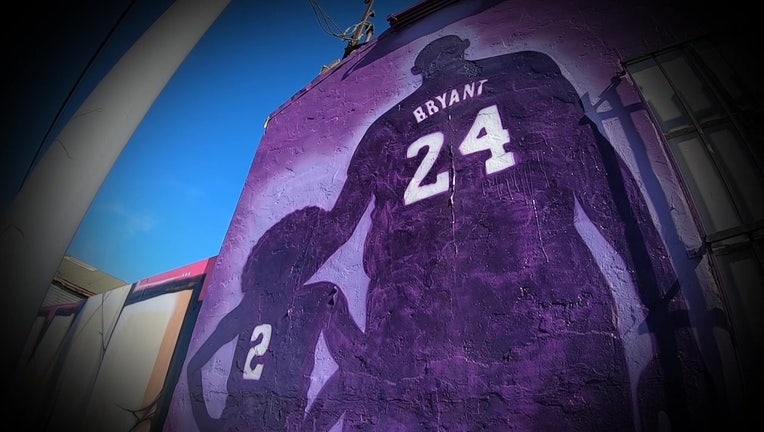 LOS ANGELES - Murals of Kobe Bryant have popped up all over the world since the NBA legend's untimely death. His death shook the sports world and one way that people are expressing their grief is through art. Artists worldwide have created various pieces to commemorate the basketball great.

How to watch Kobe and Gianna's Celebration of Life Memorial

Each mural acts as a place where people can gather together to remember Bryant not only as a basketball player but also for what he did off the court.

MOBILE USERS: To view the interactive map showing locations of all the murals, visit KobeMural.com.

Bryant worked frequently with the Make-A-Wish Foundation, he was an Olympic gold medalist, a fluent speaker of multiple languages, and an Oscar winner, just to name a few.

Once the murals began popping up all over the Los Angeles area, digital marketing and social media specialist Mike Asner created a database for fans called KobeMural.com that lists each one, the address and the artist. Asner started the database about a week after Bryant passed away.

Kobe murals popping up all over the world, and one Los Angeles resident is helping you find them

“I’ve heard from fans around the world who have made trips out here or planning to make trips out here specifically to find these murals,” Asner told FOX 11 reporter Hailey Winslow.

He included all the murals he knew about at that point but now people are constantly messaging his Instagram account, Kobe Mural, about new ones.

The website shows a map of 120 Kobe murals, with three-fourths of them in LA.

Asner said that one of his favorites is on San Vincente and La Brea by Mr. Brainwash. But others are as far as the Philippines, Spain and Italy — and the database keeps growing.

“Every day I wake up, there’s five new murals going up,” Asner said.

“It’s also important to remember that there are nine people we lost that day,” Asner said. “It’s great that some of these artists are focusing on them too, not just Kobe and Gianna.”

Bryant was killed the morning of Jan. 26, when the helicopter carrying him, his 13-year-old daughter Gianna, John Altobelli, along with his wife Keri and their daughter Alyssa, Sarah and Payton Chester, youth basketball coach Christina Mauser and pilot Ara Zobayan, crashed into a mountainside in Calabasas, California, while flying to a girls basketball tournament at his Mamba Sports Academy. Bryant coached Gianna’s team, which was scheduled to play that afternoon. She and two teammates were among the nine people killed.

Kobe Bryant memorial: What you need to know before going to Staples Center

The owners of the ampm convenience in the 3700 block of Cahuenga Blvd. in Studio City are unveiling a mural by Muckrock Friday during a community event to celebrate Kobe’s legacy.

“Really what we want to portray is the essence of family and unity and coming together and understanding that life is short and we really have to enjoy it,” said Isaac, the ampm owner.

Asner who is a huge, life-long fan of Kobe Bryant, is not getting paid, nor does he want recognition. He just wants a way for fans to find the pieces of art to help them heal, just like it has helped him heal.

If you have a mural you wanted added to the map, message Kobe Mural on Instagram.