Phoenix Police has released edited body camera video from an officer-involved shooting at a hotel two weeks ago.

PHOENIX - Police are investigating an officer-involved shooting after a man was reportedly pointing a gun at guests of a hotel near Interstate 17 and Bell Road on July 15.

According to officials, the incident began when a security guard at a Red Roof Inn in the area noticed a man, identified as 26-year-old Jayden Bush, who had been previously banned from the property he was guarding.

The guard was about to confront Bush when he noticed that he was carrying a gun.

"The security guard said he got back in his car and saw the man point the gun at him and walk away," officials said. That's when police were contacted.

Bush was in the parking lot of the hotel when he reportedly pistol-whipped someone he knew in a U-Haul truck. He then went into the hotel.

After officers arrived, they chased the man through the hotel, firing both beanbag rounds and real bullets along the way.

"Officers used a 40mm launcher to try to get the suspect in custody, which had no effect," police said in a statement.

The Phoenix Police department has released body camera video, surveillance video and 911 calls connected to an officer-involved shooting at the Red Roof Inn.

The suspect eventually locked himself inside a laundry room, and taken into custody soon after.

"Officers located the suspect with a gun in his hand running up and down a stairwell. He came out of the stairwell and pointed a gun at officers. An officer responded to the threat by firing at the suspect. The suspect ran into a laundry room of the hotel and tried to hide in a washing machine. An officer used a less lethal a stun bag causing the suspect to surrender. He was taken into custody and transported to a local hospital for minor injuries caused by less lethal projectiles," police said.

As the incident took place, hotel guests were stuck in limbo either inside the hotel, or outside the hotel, standing with their bags amid the extreme heat.

He was booked into the Maricopa County Jail on suspicion of multiple charges including warrants, weapons violations, drug charges, and aggravated assault.

Police shooting breaks out at north Phoenix hotel near I-17; suspect identified 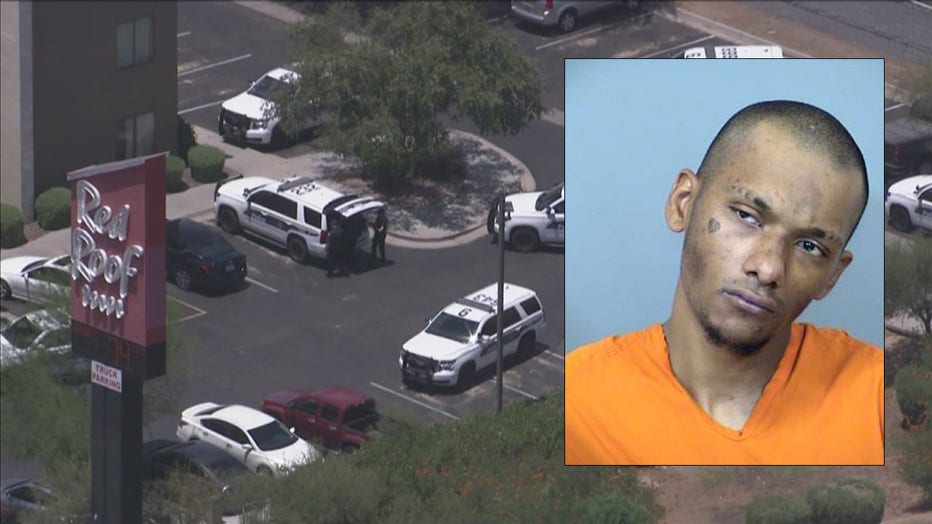