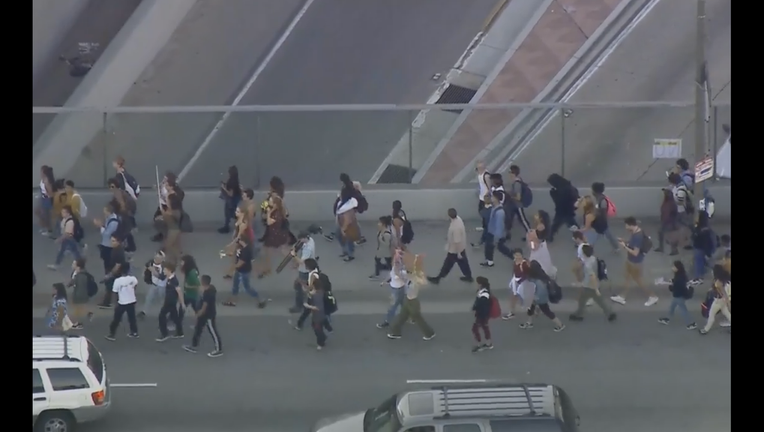 Some protesters chanted "Not my president,'' and at least one had a sign that stated: "Trump Equals Death.'' Other signs read "Epic Fail,'' "Rapist President'' and "Artists Against Trump.''

The protest was noisy but peaceful, and appeared to be growing.

Several motorists honked their horns when they saw the crowd of protesters. A helicopter hovered above the crowd, and a row of about eight police officers stood at the top of the stairs.

The rally started about 11 a.m. as a walkout at several Los Angeles Unified School District campuses, according to 16-year-old Gerson Macias, a student at Ramon Cortines School of Visual and Performing Arts.

Macias said he joined the protest after seeing other students march past their school because Trump's policies could affect him as a Hispanic and gay person.

"I believe this man cannot split families apart anymore, and cannot take away our rights as LGBT people, because we have been fighting for this for years, and this man cannot come in and just take that all away,'' he said.

Alexa Orozco, 16, said she feels personally affected by this election because she has friends and family who are "not born here.''

Because she was unable to vote, the rally was her way of expressing her opinion on Trump, she said.

"I feel like a lot of our generation, we feel strong about certain things and I feel like that it's devastating to not be able to do something like vote,'' Orozco said. "But we're not going to let that stop us from trying to do something, and that's why we're here today.''

Seeing Trump win in other states, such as Florida, was a "wake-up call to me, realizing that I haven't been anywhere else besides California,'' Orozco said.

Since the results were settled, she says she has been obsessed with looking at what demographic groups voted for which candidate.

Some of the protesters said they learned about the rally on Instagram, via hashtags such as "notmypresident.''

After rallying outside of City Hall, the protesters moved across the street to the front of Los Angeles Police Department headquarters at 100 W. First Street and chanted, "Black Lives Matter,''

As of 2:45 p.m., the protest was noisy but peaceful, as the group moved east on First Street.

Other protests of students and young people were held Wednesday across the Southland, including on the campuses of UCLA, Cal State Fullerton and UC Irvine. At Cal State Long Beach, hundreds of students took part in a march across campus, with some carrying signs and many loudly chanting, "Not my president.'' The CSULB student government set up a "safe space'' on campus designed to give students a place to express their feelings about the election.

Similar spaces were set up at UCLA, and an open-discussion event will be held from 6 to 9 p.m. at DeNeve Auditorium. University officials said the Young Progressives Demanding Action at UCLA plans to hold a rally at 11 a.m. Thursday in Meyerhoff Park.