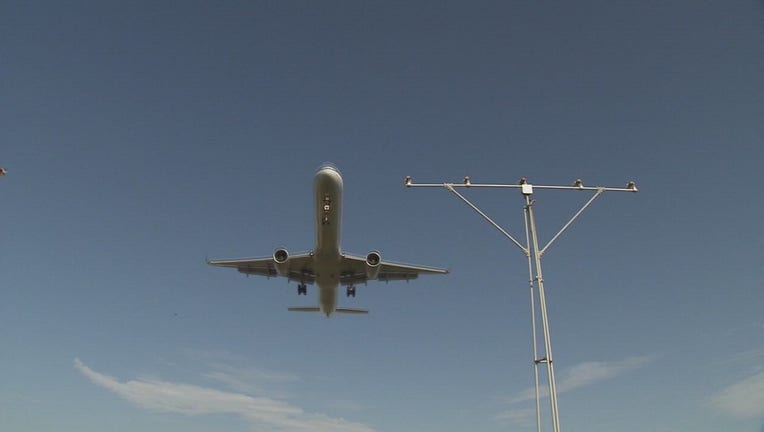 NEW YORK - A 27-year-old California man faces up to 20 years in federal prison in connection with a disturbance on an LA to Miami flight last week.

Federal prosecutors say Anthony Kevin Trujillo was on a flight on July 7, 2021, and his conduct "became increasingly disturbing" as the flight continued.

After announcing that he heard a gas leak, prosecutors say Trujillo accused a fellow passenger of storing bomb parts in her socks.

Trujillo then allegedly accused a flight attendant of carrying improvised explosive device components in his bag and tried to wrestle the bag away from him, according to an affidavit.

There were 2 air marshals on the flight.   After ensuring that there were no explosive device components in the flight attendant’s bag, they say they attempted to calm the "agitated" Trujillo.

Despite this, they claim that Trujillo got up from his seat and charged down the passenger aisle, towards the front of the airplane.

The air marshals stopped Trujillo and, after some resistance, eventually got Trujillo into an area away from other passengers. Air marshals and a flight attendant guarded Trujillo for the rest of the flight.

The pilot ordered that all passengers keep their hands raised above their heads.

For about the last hour of the flight, the pilot ordered that all passengers keep their hands raised above their heads.  The plane landed about an hour later and law enforcement boarded the plane on the ground at Miami International Airport.

Trujillo appeared in federal court for the first time on Thursday to face a charge of interfering with flight crew members and attendants.  He is scheduled to have a pretrial detention hearing on Friday, July 16, at 10:00 a.m., in Miami federal magistrate court.

Federal authorities did not release information about the airline where the incident took place.

The Federal Aviation Administration received approximately 3,000 reports of unruly behavior on flights in the first half of the year.  The agency has adopted a stricter policy against unruly passengers and warned that passengers who interfere with, physically assault, or threaten to physically assault aircraft crew or anyone else on an aircraft face stiff penalties, including fines of up to $35,000 and imprisonment.

Airlines to crack down on animals on flights

The U.S. Transportation Department will be tightening rules on passengers bringing service animals and emotional support animals on commercial flights. The biggest change would be that only dogs could qualify. Reported by Teresa Priolo