PHOENIX - Police say a suspect has been arrested after two people were found shot to death Monday morning at an apartment complex in north Phoenix.

According to a statement released by Phoenix Police Sergeant Vincent Cole on the night of Nov. 8, the incident happened the same morning, at an apartment complex near 22nd Street and Beardsley Road. Officers later learned that a man, identified as 27-year-old Steven Love-Mason, showed up at the home of 28-year-old Trystan Benallie. Benallie and Love-Mason previously had a relationship.

"Love-Mason asked a neighbor to knock on the door, and when it opened, forced his way into the resident, shooting both Benallie and Martin Louis, who were later pronounced deceased," Sgt. Cole wrote. 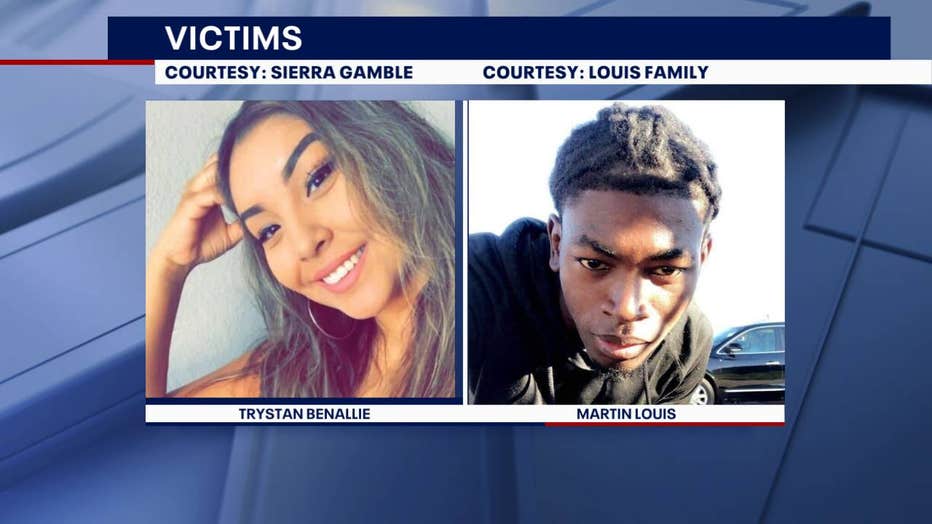 Trystan Benallie and Martin Louis were gunned down at a north Phoenix apartment. The suspect, Steven Love-Mason, was arrested. (Sierre Gamble/Louis family)

Louis was identified by police as a 23-year-old man. Love-Mason, according to police, fled the area and was located by police in Tempe, where he was taken into custody.

Love-Mason made his first court appearance Tuesday. Prosecutors said 13 shell casings were found at the scene and after the shooting, Love-Mason was captured on surveillance video taking the light rail to his mother's apartment where he was later arrested.

"Mr. Love-Mason has a significant criminal history," a prosecutor said. "He has four prior felony convictions, one of which is for aggravated assault for assaulting and choking a different female. He also has a conviction for misconduct involving weapons, for disorderly conduct with a weapon, and for unlawful discharge."

Prosecutors added that Benallie had filed an order of protection against Love-Mason, but he violated the order just days after it was served. Police were called, but charges were never filed.

According to police, Love-Mason was arrested on Oct. 22, but was released on Oct. 29, about 10 days before he returned to the apartment complex.

"A lot of this stuff is not true, I definitely did not murder the person I did love," Love-Mason said.

Love-Mason is accused of two counts of first-degree murder, burglary, and aggravated domestic violence. He is being held on a $2 million bond.

The victim, identified as 28-year-old Trystan Benallie, was shot and killed on the night of Nov. 8 along with a 23-year-old man. FOX 10's Justin Lum reports.

Loved ones are remembering Benallie, as the investigation continues.

"She wasn't afraid to tell me if she was in trouble or if she needed help or something. She's like my best friend," said Benallie's sister, Sierre Gamble.

Gamble is in heart-wrenching pain. Love-Mason and Benallie, according to Gamble, dated for a couple of months. Gamble said Benallie tried to get away from Love-Mason.

"A piece of paper won't do nothing. It won't protect you," said Gamble, referring to the protection order.

"I feel so much hurt inside. I wish I was there to give her advice to get her away from this monster, but now, is life is taken, and her kids are mommy-less now," said Benallie's friend, Tiana Yazzie.

Gamble is also devastated for the man her sister just started dating.

Gamble said Benallie, a mother of five, had plans to move out of the apartment soon.

"She was moving out, and it was too late," said Gamble. "She could have been out of that apartment and this would have never happened because she had another place. She was ready to go and move into that place."

Meanwhile, Louis' family members say they are not ready to talk about him on camera, but did say he loved making music and making people laugh.

An investigation is ongoing. If you have any information, you're asked to call Phoenix Police at 602-262-6151 or Silent Witness at 480-WITNESS.

Investigators have released few details on what happened, but did say they are not investigating the incident as a murder-suicide. FOX 10's Steve Nielsen reports.