MARICOPA COUNTY, Ariz. - A missed deadline at the Maricopa County Attorney's Office means nearly 200 criminal charges have reportedly been dropped in the county.

Maricopa County Sheriff Paul Penzone says this cannot happen again, and Phoenix attorneys say this is a major issue because, as in many of these cases, there are victims who will not get the justice they want.

"In the state of everything going on and what we’ve seen in the last year of that office, it doesn’t surprise me," said Jack Litwak with Litwak Law Group.

Tom Moring with the Jawburg Wilk Law Firm, adds, "These cases languished for a year, and now they’re all gone and that’s a serious situation."

An investigation uncovered the county attorney's office had to drop 180 misdemeanor cases including, drunk driving and domestic assault cases, because prosecutors forgot to file charges before a deadline passed.

MCAO released a statement on the report, saying, "The Maricopa County Attorney’s Office failed to review roughly 180 misdemeanor cases from 2020 prior to the expiration of the statute of limitations. The Office took steps to notify law enforcement agencies and victims of this error. The Office has also redirected resources to ensure this error does not occur in the future."

County Attorney Allister Adel did not respond to questions from FOX 10. The embattled prosecutor has faced many questions since winning her last election, as she was away from the office in September 2021 after undergoing treatment in a rehabilitation facility.

In February 2022, several of her top prosecutors signed a letter asking her to resign.

Moring represents April Sponsel, a county attorney who is suing Adel claiming she made Sponsel the scapegoat for filing gang charges against protestors in 2020.

"Here you have 180 people who have been arrested, investigated and yet nothing is going to ever come of it. Not for them, not for the people who were victims of these crimes. It’s tragic," Moring said.

Litwak says they need to look at what went wrong. "I think things need to be reviewed systemically to see what the actual problem is with the office as a whole or if it’s just one person."

Sheriff Penzone says his highest priority is the victims who will not receive justice because of this and wants to be assured this will never happen again.

"We emphasized to the County Attorney our expectation, there must be integrity and transparency in communication with the victims impacted by this issue. We also requested immediate feedback upon MCAO’s solution to this problem to ensure it will not be repeated. Additionally, we implored the County Attorney to address the long standing issue of "furthers," as this practice has been utilized to quell the MCAO caseload and subsequently slowed and been a detriment to criminal justice procedures and criminal investigations. The Colonel and I recognize the difficulties in managing complex organizations and the corresponding challenges, but we found nothing to mitigate or exonerate the breadth of this deficiency.

Most importantly, we recognize our responsibility to victims, the community and the criminal justice system. Therefore, this issue must be resolved to prevent future deficiencies. County Attorney Adel, ensured both the Colonel and I she is correcting the problem and putting systems in place to certify this does not happen again.  As we have to date, we will continue to strive for excellence and professionalism with all of our law enforcement partners."

Gov. Ducey speaks out as pressure mounts for Adel

When asked whether beleaguered Maricopa County Attorney Allister Adel should step down amid mounting controversy within her department, Gov. Ducey said leaders 'should take accountability for their actions.'

"This is really unacceptable," said Gov. Ducey. "The police officers that put their life on the line everyday and the victims of these crimes deserve justice."

When asked about Adel herself, Gov. Ducey said leaders should take responsibility, rather than blaming those on their team. 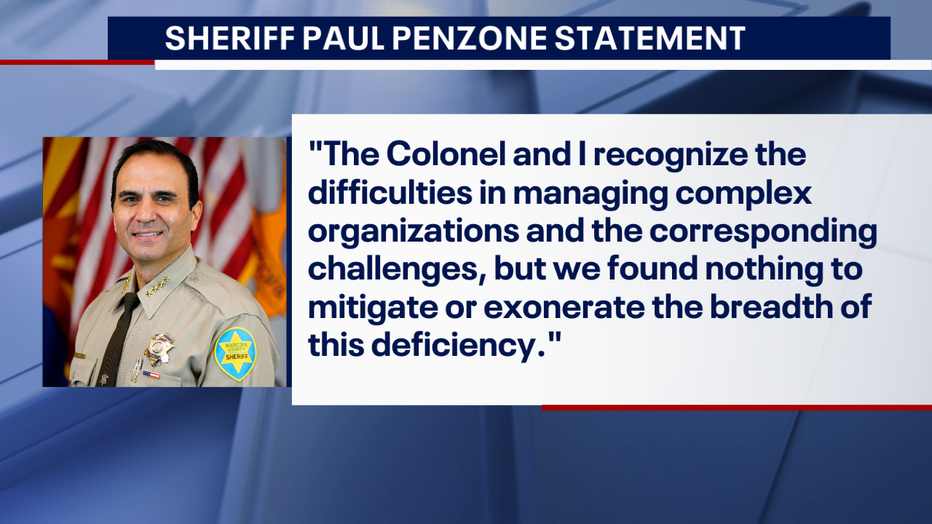