A heaping pile of dead mayflies was spotted on a bridge in Columbia, Pennsylvania, on June 22, amid a notorious annual insect swarm.

COLUMBIA, Pa. - Video captured on June 22 shows a massive pile of thousands of dead mayflies on a bridge in Columbia, Pennsylvania.

Tom Johnson-Medland shared video of the giant mound of dead mayflies which had appeared to hatch overnight before dying on the Veterans Memorial Bridge which spans the Susquehanna River and connects Columbia to Wrightsville, Pennsylvania.

Johnson-Medland estimated that the largest pile was more than 3 feet high at its highest point. 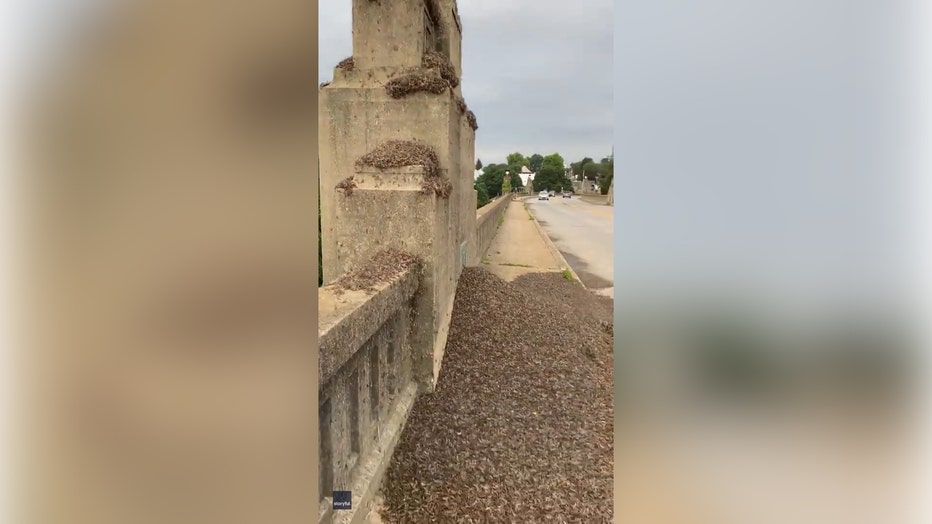 Freeze frame of video that captured pile of dead mayflies on a Pennsylvania bridge.

RELATED: ‘Extraordinary’: Video shows octopus pushing pipe with eggs inside back towards ocean

Mayflies start their lives in water and once they hatch, they spend about a year as larvae before turning into adult mayflies. Once the larvae morph into adults, they only live for about a day, according to the National Wildlife Federation.

The bugs come out in full force during the spring and summer months in the area, with the Pennsylvania Department of Transportation typically shutting the lights off on the Veterans Memorial Bridge from May through late June to reduce the volume of mayfly hatches, according to local news media.

"I walk the bridge every morning. This was the largest of three piles [I saw] on the bridge today," Johnson-Medland said.