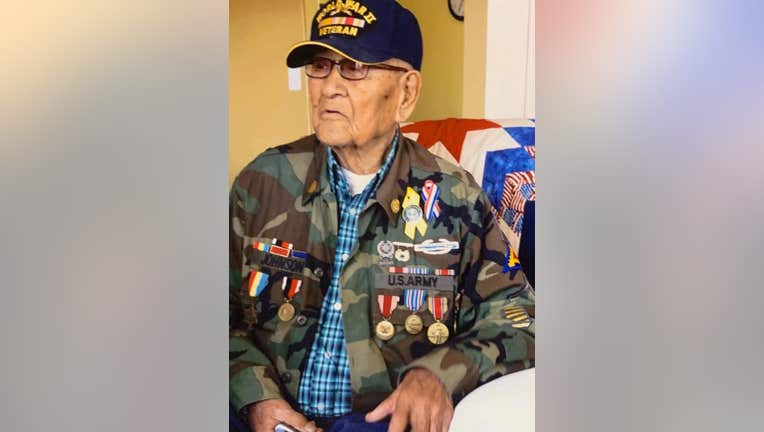 WINDOW ROCK, Ariz. - The Navajo Nation flew their flags at half-staff on Friday in honor of World War II U.S. Army veteran Fred Johnson, who passed away at the age of 103 on Dec. 2.

“As we mourn the loss of our Diné warrior, U.S. Army PFC Fred Johnson, we also honor and remember all his great sacrifices for our Navajo people and the entire country. During his lifetime, he helped many people through his military service and as a medicine person. He lived a long life full of love, memories, and service to our people. Our thoughts and prayers are with his family and his community,” said President Jonathan Nez.

Johnson, who was born in Pinon, Arizona, served from 1942 to 1946 with the 132nd Field Artillery in Italy, France, Germany, Holland and Scotland, according to a news release. He was fluent in Navajo and later learned English, Spanish and French.

"PFC Johnson’s family recalls his stories of seeing the concentration camps, human remains, and open burial sites during the war," the statement read. "He was also present in Berlin, Germany when the German military surrendered and witnessed the waiving of white flags by the German military forces."

Johnson worked for the Santa Fe Railroad after his service in the military, was a Native American Church roadman and a member of the Pinon Chapter Veterans Organization.

He was married to his wife Glennie Johnson for 59 years until she passed away in 2007. The pair had six kids, 32 grandchildren, 59 great-grandchildren and 14 great-great grandkids.

"We thank God for the life of Private First Class Johnson and all of the wonderful blessings he bestowed upon people around the world. In every aspect of his life, he was a loving and compassionate person who cared greatly for his people and his family. We ask all of our Navajo people to keep his spirit and his family in your prayers at this time,” said Vice President Myron Lizer.

The veteran will be laid to rest on Dec. 4 at a private service in Myron, Arizona.