StormRunner Media shared harrowing footage of being stuck between two floods in Tonopah, Arizona after a storm flooded a nearby wash on Oct. 15.

PHOENIX - The monsoon season may be over, but the storms aren't done yet. A Flood Watch is in effect across parts of Arizona as heavy rain, wind and thunderstorms are expected to move across the state.

The south-central and western regions of the state are forecast to be the most affected by the storm system.

Much of the state, from Pima to Mohave County, was inundated with rain, hail, lighting and gusty winds Saturday.

The National Weather Service says winds were as much as 69 miles per hour.

Much of the Valley received some measurable rainfall. Buckeye had some of the most rainfall, with the town getting more than three inches of rain.

As for Sunday, storms are still possible across the state, but these are expected to be more isolated. Hail and lightning are expected for the more severe storm cells.

The metro Phoenix area has a 30% to 70% chance for rain, but these odds will dissipate by sunset.

More than a thousand residents in Tonopah lost electricity after a possible microburst ripped through the town, causing flash flooding and major damage to homes, power lines and trees.

Officials with SRP and APS, the two major utilities serving Maricopa and Pinal counties, said between them more than 13,000 customers lost electricity by 6:30 p.m. Saturday. The remaining customers without power are mostly APS.

Power likely won't be restored until 6 p.m. Sunday, according to APS.

Get the latest outage updates here:

At Phoenix's Sky Harbor Airport, at least 20 flights were canceled and more than 400 were delayed due to the storms.

The Flood Watch is in effect for the following counties:

Get the latest watches, warnings and advisories here. 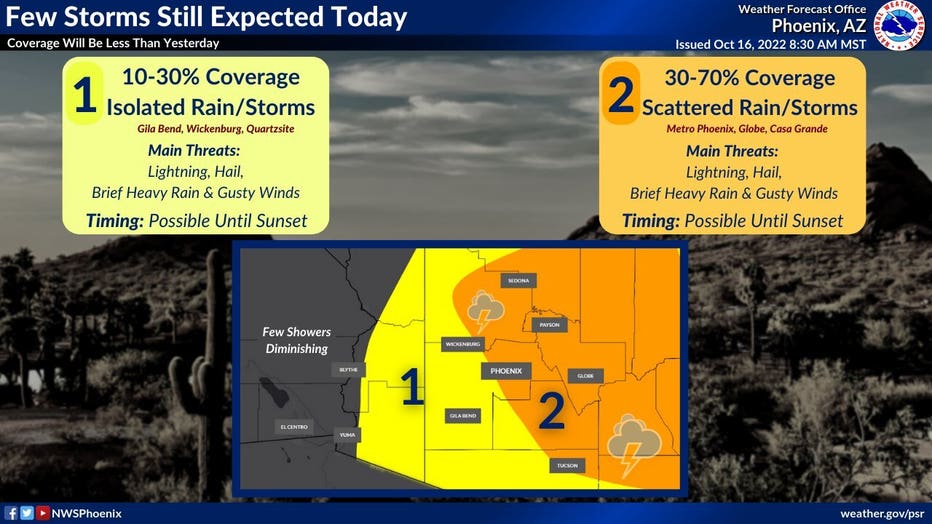 We have an estimate of Saturday's rain totals!

Hail comes down in Peoria

Clarissa Miranda shared this video of hail coming down during a storm in Peoria on Oct. 15.