In this video, one of the dogs shows off the signals its learned when detecting potential COVID-19.

LOS ANGELES - According to the National Institutes of Health (NIH), researchers reported that a cancer drug has been found the relieve some of the harshest symptoms in patients with COVID-19.

The research has led to clinical trials in order to test whether the drug can be used as a safe and effective treatment for individuals who have contracted the novel coronavirus, according to the NIH.

According to the NIH, when COVID-19 attacks a patient’s immune system, an exaggerated response from that person’s immune system can result in serious damage to the function of major organs, including the lungs.

Normally, in the event of an infection, certain chemical messengers in the body help stimulate a response, but researchers found in patients suffering from COVID-19 that large amounts of these messengers can be triggering a dangerous hyper-inflammatory state in the body, which the NIH said there is currently no proven treatment strategy for.

Researchers said that a protein known as the Bruton tyrosine kinase (BTK) protein plays a critical role in how a person’s immune system responds to bacteria and viruses. One BTK inhibitor, called acalabrutinib, which has previously been approved to treat certain cancers, was identified as a potential treatment for the coronavirus.

A team of scientists from NIH’s National Cancer Institute and NIH’s National Institute of Allergy and Infectious Diseases (NIAID) carried out a clinical study using the drug on 19 patients who had tested positive for COVID-19 and exhibited evidence of inflammation, requiring hospitalization.

Of those 19 patients, 11 had received supplemental oxygen for two days on average while eight of the 19 had been on ventilators for an average of 1.5 days.

After receiving acalabrutinib, eight of the 11 patients requiring supplemental oxygen experienced a drop in inflammation and their breathing improved. They were eventually discharged from the hospital.

Of the eight patients who were put on a ventilator, four were able to come off of it and two were discharged from the hospital. Two of the patients from the ventilator group died, according to the NIH.

While the sample was relatively small, researchers believe that if the drug were to successfully pass clinical trials, it could help in treating some of the harshest outcomes of COVID-19.

RELATED: Beyond fever and shortness of breath, experts say COVID-19 symptoms can appear in unusual ways 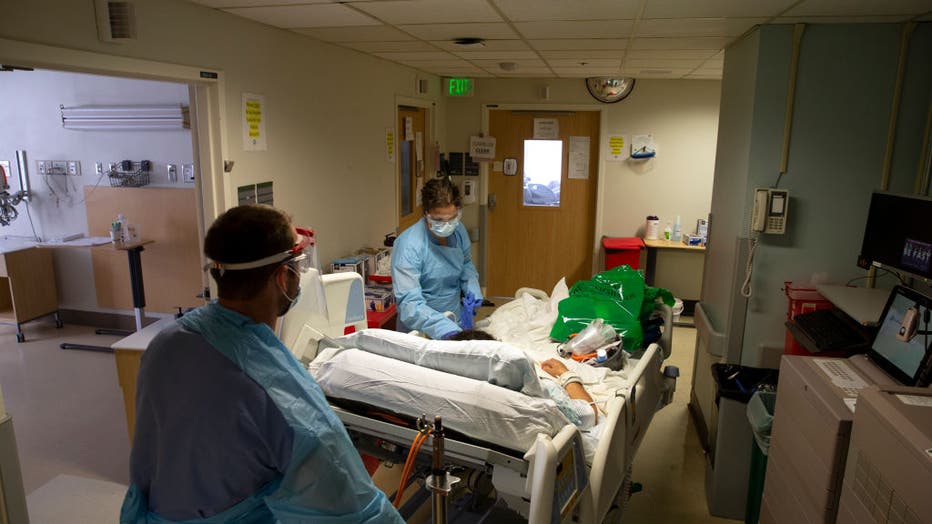 Nurses from an ICU COVID unit in Seattle treat a patient. (Photo by Karen Ducey/Getty Images)

“If these results are confirmed by a randomized, controlled clinical trial, this therapy may play an important role in the control of severe COVID-19,” said Dr. Wyndham H. Wilson, the research lead from the NCI.

The announcement by the NIH comes as separate analysis from researchers in England found that a cheap and widely available steroid called dexamethasone drastically improved COVID-19 survival rates, resulting in the British government authorizing the drug’s use across the United Kingdom for coronavirus patients.

The study, led by the University of Oxford, was a large, strict test that randomly assigned 2,104 patients to get the drug and compared them with 4,321 patients getting only usual care.

The drug was given either orally or through an IV for 10 days. After four weeks, it had reduced deaths by 35% in patients who needed treatment with breathing machines and by 20% in those only needing supplemental oxygen. It did not appear to help less ill patients.

Researchers estimated that the drug would prevent one death for every eight patients treated while on breathing machines and one for every 25 patients on extra oxygen alone.

“Those are big effects," said one study leader, Dr. Martin Landray at Oxford. “It’s not a cure, but it’s certainly a long way forward.” It's especially good news that the drug “is remarkably cheap, perhaps $20 or $30 for an entire course of treatment,” he added.

Steroid drugs reduce inflammation, which sometimes develops in COVID-19 patients as the immune system overreacts to fight the infection. This overreaction damages the lungs and can prove fatal. The World Health Organization and others advise against using steroids earlier in the course of illness because they can impede clearing the virus.

Until now, the only drug shown to help fight COVID-19 was remdesivir, an experimental drug from Gilead Sciences that blocks an enzyme the virus uses to copy its genetic material. Remdesivir shortened the time of recovery for severely ill hospitalized patients to 11 days on average versus 15 days for those just given usual care, in a study led by the U.S. National Institutes of Health.

“We don’t know yet” if remdesivir could be used with dexamethasone — or before or after it — to give more benefit, said the United States’ top infectious disease expert, Dr. Anthony Fauci.

The Oxford study is the same one that earlier this month showed the malaria drug hydroxychloroquine was not working against the coronavirus.

What to know about hydroxychloroquine and chloroquine

A lot has been said about hydroxychloroquine and chloroquine, the malaria drugs pushed by President Trump as treatments for COVID-19.

The study enrolled more than 11,000 patients in England, Scotland, Wales and Northern Ireland who were given either standard care or that plus one of several treatments: dexamethasone; hydroxychloroquine; the HIV combo drug lopinavir-ritonavir; the antibiotic azithromycin; the anti-inflammatory drug tocilizumab; or plasma from people who have recovered from COVID-19 that contains antibodies to fight the virus.

On Monday June 15, U.S. regulators revoked emergency authorization for malaria drugs promoted by President Donald Trump for treating COVID-19 amid growing evidence they don’t work and could cause serious side effects.
The Food and Drug Administration said the drugs hydroxychloroquine and chloroquine are unlikely to be effective in treating the coronavirus. Citing reports of heart complications, the FDA said the drugs' unproven benefits “do not outweigh the known and potential risks.”

In a separate announcement, the FDA also warned doctors against prescribing the drugs in combination with remdesivir, the lone drug currently shown to help patients with COVID-19. The FDA said the anti-malaria drugs can reduce the effectiveness of remdesivir, which FDA cleared for emergency use in May.

Hydroxychloroquine and chloroquine are frequently prescribed for lupus and rheumatoid arthritis, and can cause heart rhythm problems, severely low blood pressure and muscle or nerve damage. The agency reported Monday that it had received nearly 390 reports of complications with the drugs, including more than 100 involving serious heart problems. Such reports represent an incomplete snapshot of complications with the drugs because many side effects go unreported.

Dr. Steven Nissen, a Cleveland Clinic researcher who has been a frequent FDA adviser, agreed with the decision and said he would not have granted emergency access in the first place.

“There has never been any high-quality evidence suggesting that hyrdoxychloroquine is effective” for treating or preventing coronavirus infection, he said, but there is evidence of serious side effects.