Jack Thomas shared this video of how the Grand Falls northeast of Flagstaff looked on Aug. 18.

It's like a scene from "Willy Wonka & the Chocolate Factory," except this ‘Chocolate Falls’ can be found in Arizona.

The Chocolate Falls, a nickname for Arizona’s Grand Falls, is the largest waterfall in the state and is known to be a sight of "Pure Imagination."

You don’t need a Golden Ticket to reach these falls, but you will need to monitor the weather, take a gravel road and drive deep into the Navajo Nation.

VIDEO: Don't take a taste of these chocolate falls...

The falls, 45 miles east of Flagstaff, Arizona, most times are just a trickle. Recent monsoon rains ramped up the Little Colorado River and the volume of water over the falls.

"The natural beauty of the falls brings out the visitors from across the country," said Calvin Johnson, who visited on Saturday. "The rough dirt roads didn't stop them from travel to see Charlie's Chocolate Factory of the Milk Chocolate Monsoon rains."

Resist the urge to taste, though, this is not Wonka’s special recipe for light and frothy candy bars. The falls get their nickname from the color of the water after it picks up muddy dirt and clay from the desert floor.

The Chocolate Falls is over 181 feet tall, rivals the height of Niagara Falls, dwarfs the Statue of Liberty and is just a few feet shorter than the Leaning Tower of Pisa in Italy.

Word of the phenomenon has caught on.

"The amount of visitors was overwhelming for an ‘unofficial’ park. I've seen over 100 cars at the ‘Falls’. People were hiking down to the bottom of the falls to get a closer look," Johnson, a member of the Navajo Nation said. "People brought their pets and walking shoes. People brought out their tiny cars, which is not really recommended."

To catch the falls with water, the Navajo Tourism Department recommends keeping an eye on the upstream water gage near Winslow, Arizona. The waterfall will have water if the flow is over 200 cubic feet per second, the website states. But, they advise visitors to wait 24-48 hours to visit if the volume is in the thousands for safety.

You may want to put off a visit. The FOX Weather Forecast Center expects heavy rain through the end of the work week, so the falls may be dangerously swift.

Spring is also a good time to visit after a snowy winter in the mountains. The river fills as the snow melts.

"The falls only runs during high snowpack season and during monsoon seasons, and this year it's spectacular," said Johnson.

Get updates on this story at FOXWeather.com 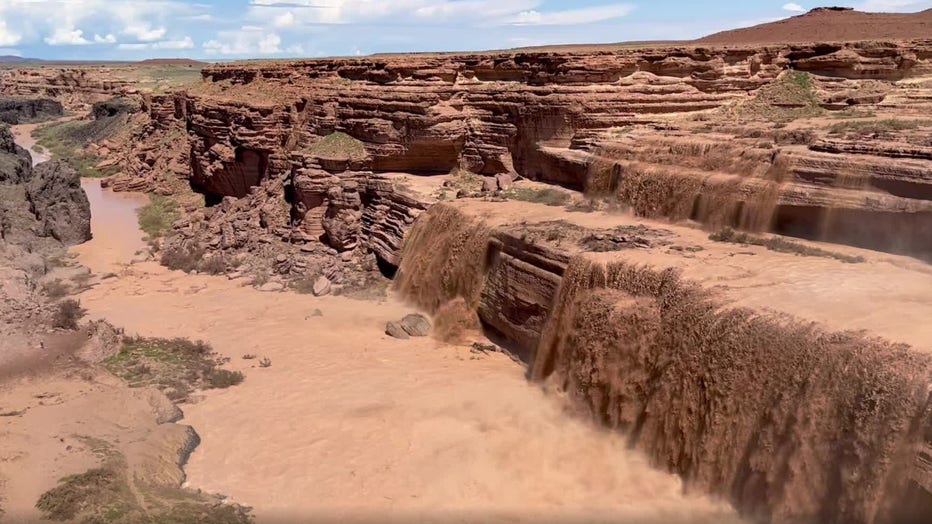 Jack Thomas caught a view of this part-time waterfall on Aug. 18. Monsoon rains flooded the river which poured over the Grand Falls near Leupp, Arizona nicknamed the Chocolate Falls due to the color of the muddy water.