According to police, the incident began as a burglary, which later ended with the police shooting. FOX 10's Lauren Clark spoke with a person who lives in the area about what she saw.

According to police, a man who was not home called 911 after being alerted by his home surveillance camera that someone was inside his home.

Police believe the male suspect was attempting a burglary.

Officials say when officers arrived, they heard a commotion inside the closed garage door. The garage door was later opened, and they confronted the suspect, who ran back inside the home.

The suspect, according to investigators, later left the home through the backyard, with a rifle. It is unclear if the rifle belonged to the suspect, or if he took it from inside the home.

Officials say officers ordered the suspect to drop the gun, but he did not, prompting two officers to shoot.

"Police were outdoor with their guns drawn. I looked out the door, and for sure we saw that, so of course – I have nine children, and I had to get them all to safety. I had to get my weapon out to protect my family, you know, but we heard the gunshots, and that was pretty much it, and O saw them bring the guy out on the street and do CPR for a good – almost like 20 minutes," said Leauna Jones, who lives in the area.

The suspect, according to Sgt. Jason McClimans with Chandler Police, was taken to a local hospital, where he was later pronounced dead.

The suspect's identity has not been released, and police say there are no outstanding suspects or danger to the community.

According to officials, the incident was captured by the two officers' body camera, and the home camera system also captured the scene. 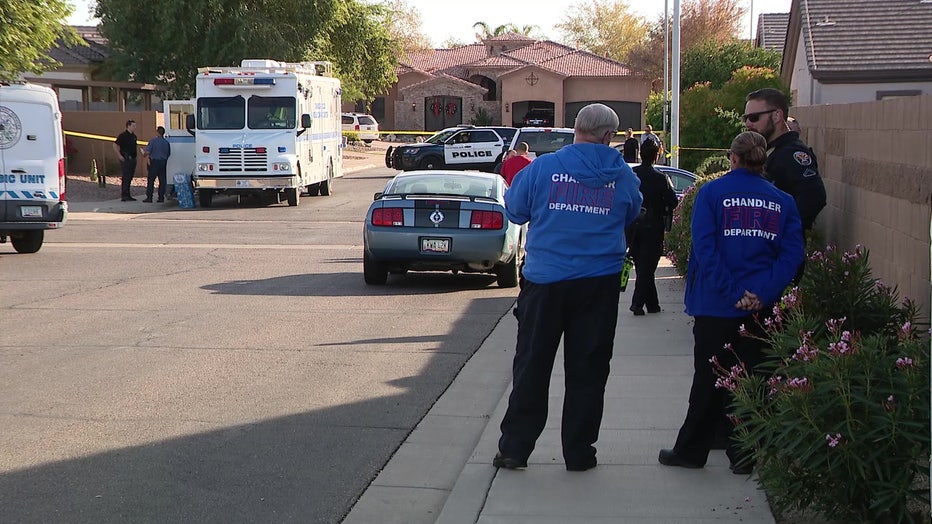