Phoenix homicides: How we stack up to other cities similar in size

PHOENIX - It's no secret we've seen more murders in the city of Phoenix over the last two years. There's been a nationwide increase since the COVID-19 pandemic began. What's being done now to bring down the deadly violence?

The stats don't lie. Phoenix has seen at least 400 homicides since 2020, but behind the numbers, there are victims with grieving families waiting for justice and the ongoing challenge of finding solutions to make communities safer. We widened the scope and compared Phoenix to four other major cities with similarities and differences.

We usually know who was killed, what happened, when and where.

But the "why" – that takes time. In many cases, time takes a toll.

What are the root causes?

"I would never wish this on anybody. You know, unfortunately, I’m not the only one going through it," said Brenda Gilliam-Miller, whose daughter was a victim of homicide.

In 2020, homicide numbers in the city of Phoenix shot up by more than 40% and the murder stats remained nearly the same in 2021. So what is the root cause?

"I couldn't tell you why. I wish I knew. I think that would probably help us lower those numbers," said Lt. David Albertson with Phoenix Police Department.

Did the pandemic have a ripple effect on violent crime?

""I think that did have a lot to do with it. It increased a lot of strain unemployment increase. People had the stress of being unemployed, being home. You have a lot of more individuals that have more time to pursue activities that could have gotten them in trouble. So I think once the numbers are crunched two or three years from now, we're going to see that that was a major causal factor. And that's what we're generally seeing anecdotally in individual cities and when you start looking at 2020 in particular," said Jesenia Pizarro, an Arizona State professor of criminology and criminal justice.

Rates in cities of similar size to Phoenix

In 2022, what's being done to decrease homicides and clear active cases as well? This investigation looks at four other cities with a close population size to Phoenix, which is 1,608,139.

In 2021, Philadelphia's homicide rate of 35 per 100,000 people ranks first among all five cities – setting an all-time record for murders with 562 in city limits. 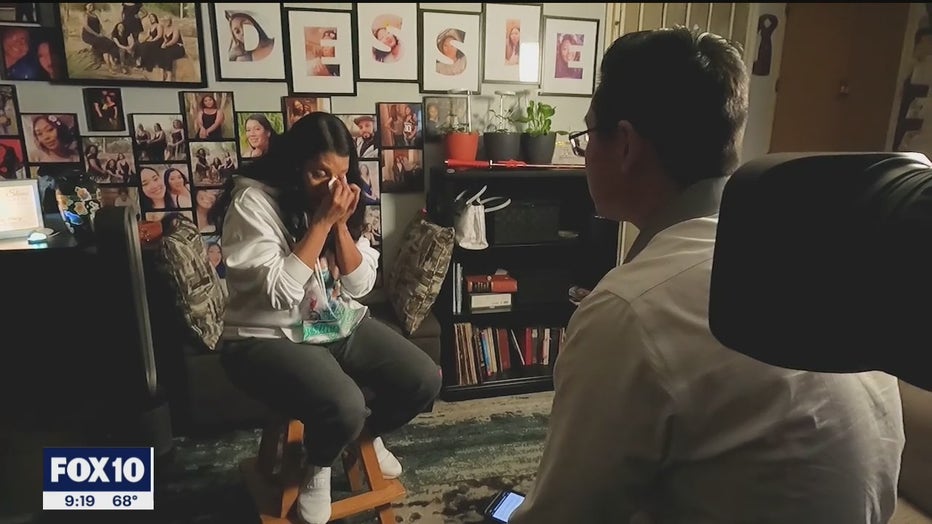 Brenda Gilliam-Miller says her daughter is more than a statistic.

"Well, I’m just finally getting to a point where I can look at pictures and not cry," she said.

At 23, Destiny McClain rarely went out. Instead, she enjoyed family time.

"She danced to the beat of her own drum. She didn't conform to what people felt she should be. She was herself. She wasn't the type to try and be cool, you know, and try and dress a certain way because other people are dressing that way. Destiny was just Destiny," Gilliam-Miller said.

Ring surveillance video shows McClain leaving her home for the last time on the night of July 17, 2021. She took an Uber to Karamba nightclub to see a longtime friend and several hours later, Gilliam-Miller says she couldn't reach her daughter.

She had her cell phone location and followed it, arriving at 17th Street and McDowell Road only to find Phoenix Police officers and crime tape.

"So I waited for what seemed like an eternity and I went back, and I pulled out a picture of my daughter. I said, ‘Look, this is my daughter, you know, is she hurt?’" Gilliam-Miller said.

She learned a homicide investigation was underway and the victim was a female.

"At that point, I knew it was my child – the detective wanted to talk to me. I waited and then that's when they told me that Destiny had been shot," Gilliam-Miller said.

Shot and killed while ordering from a food truck.

Since McClain's murder, leads are hard to come by, but Phoenix Police did release video of a car suspected to be involved in the drive-by shooting.

Officer shortages and methods of policing

Meanwhile, Phoenix Police is facing a shortage of 400 officers, and Lt. David Albertson with the homicide unit says patrol officers are crucial to investigations.

"Preserve the evidence, secure crime scenes, identify witnesses that ultimately help us. So with an officer shortage, you see a little bit of an increase in response times. Ultimately that hurts us because we may potentially lose some evidence or lose a witness, things like that," Albertson said.

It's a tactic known as "hot spot policing."

Albertson says Phoenix Police is already using this method. "We pay close attention to the statistics where those hotspots, as you say, are, and we definitely shift resources, not only manpower but technology resources as well."

Phoenix Police is partnering with Arizona State to study and address rising crime along 27th Avenue between Indian School Road and Northern Avenue.

The 27th Avenue Corridor Community Safety and Crime Prevention Plan was approved by the city council in February 2022, focusing on outreach, education and partnerships to specifically target violent crime.

"I know that in Phoenix PD, they've been working really hard to try to get ahead of the problem. And based on the quarterly estimates for the first quarter of 2022, it looks like some of the things are paying off," says Jesenia Pizarro, a professor at ASU's School of Criminology and Criminal Justice.

A proactive approach to violent crime is just as important as a reactive one, she says.

"We can invest in these communities, we could provide activities for youth, we can provide better education, we could provide free lunches, all these things we know could actually help in prevention," Pizarro said.

The professor researches situational traits behind homicides and the lifestyles of victims and their offenders. She says there's no "one-size fits all" answer to deadly violence.

"It depends on what type of violence you’re looking at. Even though the culmination is the same, there’s somebody dead. The root cause is different, so you need to tackle it based on what the root causes are," Pizarro explained.

‘I can’t explain what is happening'

"I can’t explain what is happening because I don't understand it. But the way it is right now, it's just, it's ridiculous," Gilliam-Miller said.

If there is a silver lining, Albertson points to Phoenix Police's homicide clearance rate. From 2020 through 2021, it's hovered around 73% – an improvement compared to 2019 and years prior.

"To be able to see a year where we have 41% more homicides, and we're able to increase our clearance rate 10%, I mean that's pretty phenomenal," he said.

Gilliam-Miller is hoping her daughter's murder will be solved and cleared so she can have closure and justice.

"My daughter didn't deserve it. I just feel that whoever did that should be held accountable," the grieving mother said.

Police executives in big cities across the country do collaborate. For example, the Major Chiefs Association, of which Phoenix Police Chief Jeri Williams is the president, shares ideas and strategies.

We're taking a look at more numbers connected to these five police agencies, specifically the number of officers per 100,000 people and the budget each of these departments has to work with.

Do these factors have an effect on violent crimes at all? We have more information on these statistics below.

Phoenix Police are asking the public's help in finding Jessica Burris, 32, in connection to the shooting death of Michelle Tate at the Canyon Palms Apartments last December in Phoenix. If you have any information, you're asked to call police at 602-262-6151 or Silent Witness at 480-WITNESS.

A 33-year-old man was killed in a Phoenix shooting on Sunday morning, the police department said, and the person responsible hasn't been caught yet.

According to Phoenix Police, officers responded to a shooting just after midnight on April 2 near 75th Avenue and Indian School Road and found a 39-year-old man who had been shot.