PHOENIX - Tensions are still high after a lockdown at Central High School in Phoenix, and surrounding campuses, following reports of shots fired on school grounds.

The school says resources will be made available as students return to school Monday following the incident.

No one was shot, and no gun was ever found, but the backlash from students and parents seems to go much deeper as parents say they're getting a lot of conflicting information.

Police found no evidence that shots were fired at the school, but the incident left everyone on edge on Sept. 9.

"We need zero tolerance for fight culture at our school," a parent said in a meeting held a day after the scare. Another said, "This is not something that we forget about or just dismiss."

In a news release on Sept. 10, police say three juveniles who were detained at the school have been identified as victims of assault, and the person responsible hasn't been caught.

The manner in which the students were hurt hasn't been detailed. 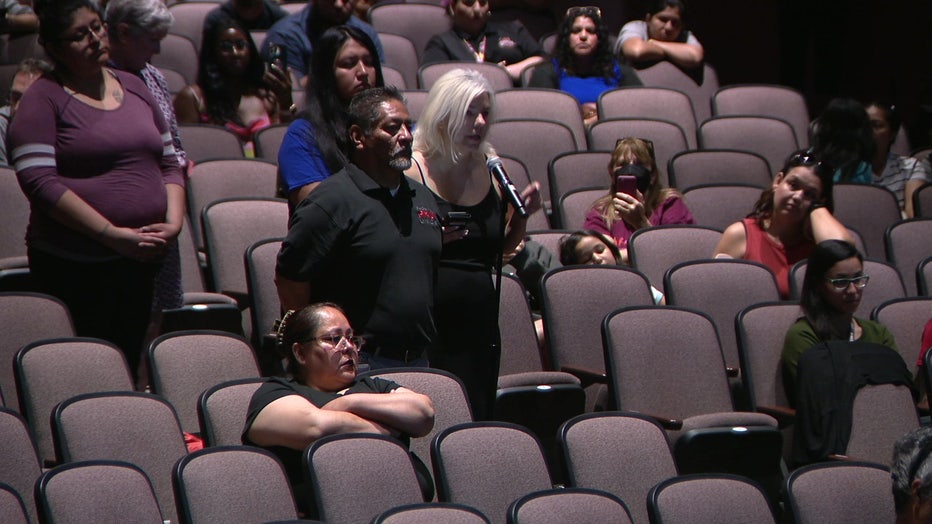 Police say it all started with a fight and students reported hearing popping sounds. The school was locked down, along with Xavier, and other surrounding schools.

Police say when they surveyed the area themselves and had trained dogs sniff out the school, they found no detection of gunpowder and no trace of a weapon.

Layla Welsh, a senior at Phoenix Union, says, "How do you explain across the four schools on lockdown, and they had students complaining about the same exact sounds, how is that just a rumor?"

She says her best friend saw what reportedly happened.

"I know for a fact that my best friend saw the gun pulled out, and she went running and screaming. I know students don't run from hands being thrown at each other. I know they run when there is immense danger," she said.

The father of a student, Wayne Newell, says his son never heard anything.

"I think it was a small thing and the teacher that broke it up right then and there was one of my son's teachers. He never heard anything about hearing a gunshot, and he's straightforward. He's
got nothing to hide," Newell said.

Many parents also criticized the different instructions given to the students during the lockdown. Police say the instructions did change as the situation continued to unfold.

"When it comes to these types of events, you have to be flexible and have lots of different options," police said.

School officials say they do have people watching the entrances, and they have handheld metal detectors on site.

"We are trying to create campuses that are safe and feel safe and when you walk in, it doesn't feel like you're walking into a prison," the superintendent.

The school also got rid of its student resource officers in 2020, however, that was not a big point of discussion during the meeting. They were replaced by regional school safety officers.

The money was reallocated toward community-driven initiatives on school safety.

A day before students and staff were set to go back to campus, a letter was released by Phoenix Union saying the district's governing board launched a district-wide safety committee and guardians will be given more information about those details soon.

Phoenix Union acknowledged the distress an incident can take on all involved.

"At Central tomorrow, staff, students, and parents will return with many questions and a need for social-emotional support. We have restructured Monday’s schedule at Central so that all staff and students will have space and time to process Friday’s events. We ask that students who need extra support, reassurance, or assistance reach out to their campus counselor or social worker," the letter read, in part.

The letter also responded to the meeting held the day after the incident, saying it was a traumatic situation to be in.

"Friday was traumatic. We heard from several Central High School and Phoenix Coding Academy students and families on Friday evening and again on Saturday. There is fear and frustration. There is anger and anxiety. Staff, students, and parents have increasing concerns about school safety in general - not just in Phoenix Union but nationwide. Increased access to firearms and illegal substances, as well as the disruptions caused by social media threats and posts of violent acts, make school safety procedures and policies more important than ever," the letter stated.

The incident happened at Central High School on Sept. 9, and resulted in a lockdown that lasted for some time. FOX 10's Stephanie Bennett reports.

The incident happened at Central High School on Sept. 9, and resulted in a lockdown that lasted for some time. The scene has since been cleared. FOX 10's Brian Webb reports.

Authorities announced Central High School was on lockdown after a fight and "possible popping sounds" were reported. Phoenix police say students are being brought to parents at a nearby park.

Phoenix Union will no longer will have school resource officers, takes new direction for campus safety

They have more than 1.2 million dollars to use for the next option they decide on.