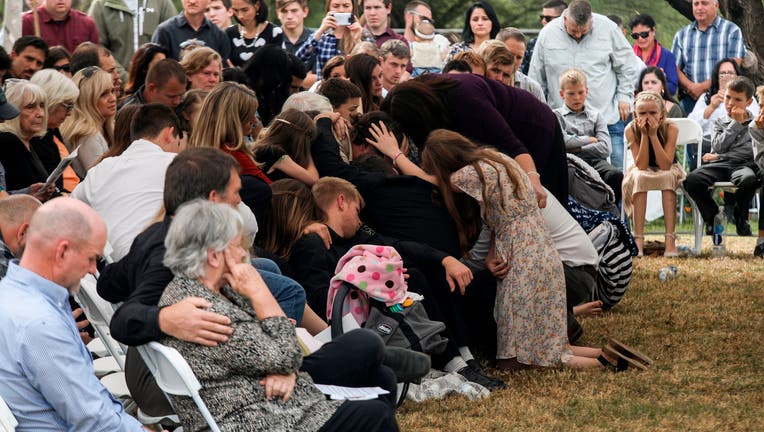 Relatives and friends mourn during the funeral service of Dawna Ray Langford, 43, and her sons Trevor and Rogan, who were among nine victims killed in a hail of bullets in an attack authorities have blamed on a drug cartel, at La Mora Ranch in the mu

LA MORA, Mexico (AP) — After holding funerals for and burying some of the nine American women and children slain in a cartel ambush, residents of this town of about 300 are coming to grips with the fear the attacks inspired among the tightly knit community.

“I do not feel safe here, and I won’t, because the truth is we aren’t safe here as a community,” a tearful David Langford said to mourners at the funeral for his wife, Dawna Ray Langford, on Thursday in La Mora, whose residents consider themselves Mormon but are not affiliated with The Church of Jesus Christ of Latter-day Saints.

While the sibling community of Colonia LeBaron has been peaceful since the 2009 murder of one of its members and subsequent installation of a security base, La Mora lacks such a presence — at least until Monday’s killings prompted state and federal forces to deploy to protect those who came to mourn. How long they stay could be crucial to its future.

“We here in the mountains, we have no access to authorities, or very, very little,” David Langford said.

The first burials took place as Mexican soldiers stood guard, a reminder of the dangers they face living amid a drug cartel turf war.

On Friday, the bodies of Rhonita Miller and four of her children, all of whom also were murdered on the road between La Mora and Chihuahua state, were being taken back across that same dirt-and-rock mountainous pass in a convoy of pickups and SUVs for burial in Colonia LeBaron, which awoke under a persistent drizzle as locals made ready to head to the cemetery.

Miller was eulogized as an “innocent spirit, beautiful heart” and a woman whose laugh “could light up a room.”

Son Howard Jr. loved basketball and recently was delighted to make his first three-pointer; daughter Kristal was “the apple of her daddy’s eye;” twins Titus and Tiana, born March 13, were remembered as “two perfect angels in the first precious moments of their lives.”

La Mora and Colonia LeBaron are intertwined by decades of marriages and births, and share a sense of community as English-speaking, dual-citizen Mormons living in Mexico, even if there’s variety from family to family on actual religious views and practices. An offshoot of The Church of Jesus Christ of Latter-day Saints, they are not affiliated with the mainstream church.

Set on a highway running through the northern state of Chihuahua, Colonia LeBaron is home to farmers of crops like pecans, alfalfa and cotton. The state is also home to drug cartels who smuggle their goods across the border to the United States, and at times war over territory.

Gunmen from the Juarez drug cartel had apparently set up the ambush as part of a turf war with the Sinaloa cartel, and the U.S. families drove into it.

Mexican officials said the attackers may have mistaken the group’s large SUVs for those of a rival gang, but community members dispute that and say they have proof the attackers knew they were targeting women and children.

Locals say they’ve been left alone by the gangs in LeBaron since 2009. But the killings cast doubt on the security situation in far more isolated La Mora, population about 300, where people have to drive about 20 minutes out of town to catch a cellphone signal. Residents share home WiFi passwords with their neighbors, so they can link in along the main road.

It’s too soon to say for sure what will happen to La Mora, but locals are weighing whether it’s safe to stay. Steven Langford, who was mayor from 2015-2018, predicted that as many as half could leave, turning it into a “ghost town.” Others say there’s no way they’re leaving.

Erasmo Valenzuela, a 50-year-old Mexican who has worked with the families in La Mora for a decade, said he has heard that two or three families intend to leave.

Grilling beef and chicken over barbecue pits to feed the hundreds of mourners who came for the services, he said the Americans create jobs and pay well, and he would hate to see an exodus. An official had come from Mexico City following the killings to discuss the possibility of establishing an army base in the area, he said, and hopefully that could help people feel safer, just like what happened in LeBaron.

“It’s a shame for innocent children to die,” Valenzuela said. “Sometimes bad things have to happen for good things to happen, so that we feel safer.”