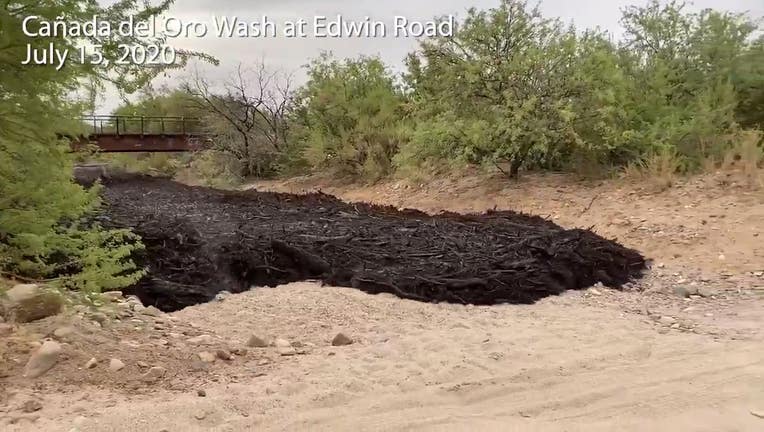 TUCSON, Ariz. (AP) — Many Pima County homes and businesses could face flood damage in the wake of the latest large wildfire in the Tucson area, according to authorities.

The lightning-caused Bighorn Fire started June 5 and charred about 187 square miles in and near the Santa Catalina Mountains before it was fully contained on July 23.

A county Regional Flood Control District hydrologist told the Star the risk to Tucson residents from monsoon flooding due to the wildfire could last up to five years because of the way the blaze altered the watershed.

It typically takes watersheds two to five years to recover from such severe burns.

County flood control officials used computer models to help calculate the risks to homes and businesses downhill of the fire.

They found 982 buildings facing flood risks including 834 in unincorporated areas of Pima County, 109 in Oro Valley, 38 in Tucson and one in Marana.

Rain returned to the Valley thanks to a monsoon storm on the afternoon of July 24.

The National Weather Service has reported that a tornado has landed east of Kingman.

Flooding a danger during monsoon season for many Arizona residents

With rain and stormy weather on July 23, Arizona is officially in monsoon season, and fire officials say that can mean dangerous conditions for many Arizona residents.

Monsoon storm brought blowing dust, rain to parts of the Valley and flooding in Tucson

A storm on July 23 brought rain to a number of areas in the Northeast Valley and the West Valley.