If you're an SRP customer, your power to turn the TV on comes from hundreds of miles away. The lines that carry it run through dense forests prone to wildfires. FOX 10's Steve Nielsen has more on a massive undertaking that's done between the trees to keep the lights on.

PAYSON, Ariz. - If you’re a Salt River Project customer, your power to turn your TV on comes from hundreds of miles away. The lines that carry it run through dense forests that are prone to wildfires.

Wildfire season started hot this year. Homes were destroyed and thousands of acres burned at night as unprecedented winds fueled the Tunnel Fire.

"It was 70 mile per hour winds and homes built closely together…you get a flaming front one to the next and once one started.. that shows you how windy it was right there," said Dick Fleishman of the Coconino National Forest.

Fire crews told FOX 10 that soon enough, the only thing left in its path was the Forest 500. Here, the noise of the wind is overpowered by the sound of power.

"Yeah, you can almost feel it," said Ryan Knowlton, a utility forester with SRP.

500 kilovolt power lines dice the forest in two. An easement a few hundred yards wide stretch for 254 miles. SRP’s line known as the Forest 500 carries power from the Coronado Generating Station all the way down to your light switch in Phoenix.

"It’s a big step to get it from here to your house, but yeah, this is where it starts from," said Knowlton.

So protecting this line is a top priority.

FOX 10 was taken off the pavement, miles down dirt roads east of Payson to get access to the work that’s only done once every five years. You can barely hear it, or see it, as this massive mowing truck tackles boulders and steep terrain. We were told to keep a 500-foot distance for our safety, because the blades destroy everything in its path.

"It’s up and down, very hilly, it’s a lot of terrain," said E.J. Cochrum, a utility forester with SRP.

Twice a decade, they cut through the brush, the trees growing, and the ground cover. If a wildfire came here, it could threaten power to the Valley.

"When we have a transmission right away like this, it does kind of create a natural fire break if there were to be a wildfire that moved through here, trying to control the fuels in here will mitigate the risk from wildfire," said Knowlton.

Knowlton says flames might not be the biggest risk though, even smoke could be enough.

"If you have dense enough clusters of brush in this area that could burn and smolder for long enough, creating enough smoke, you could potentially have a sky to ground fault which would be electrical current coming from the transmission line to the ground, which cause a fault in our system and interrupt service for our customers in the Valley."

After these big machines move through this area, SRP crews will come in by hand, and they'll have chain saws and other cutting equipment. Their goal is to go through this big open field and cut down some bushes or the smaller trees like this one up against the tree line here that the big machines couldn't get because it's up against a boulder or maybe some power lines.

"It’s pretty challenging all the way down into the Valley," said Cochrum.

But they say the work is critical.

"If there is any interruption in this service, it can affect all of our customers in the Phoenix area," said Knowlton.

Bush by bush, tree by tree, they’ll be back again in five years. They say they have to, to make sure the lights stay on. 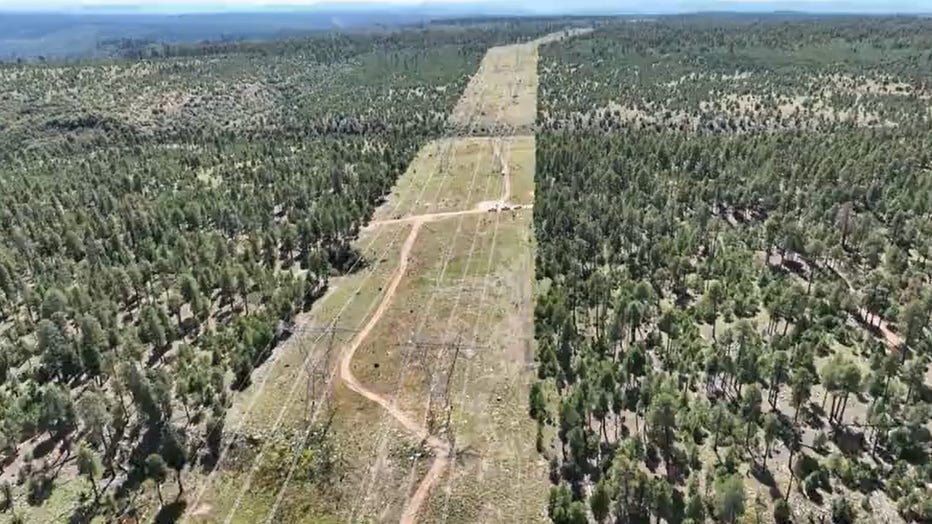