We're consistently under Ozone warnings and air quality warnings, the American Lung Association gives us an F for air quality, and we also have the 5th worst ozone in the U.S. FOX 10’s Krystal Ortiz looks into the reasons behind Phoenix's air quality woes.

Highlighting the air quality issue the Valley faces is a national report that suggests Phoenix has some of the worst air in the country.

"I think about my breathing every day."

Rev. Wynn has lived with asthma since she was 2 years old. It’s a condition that affects about 600,000 Arizonans.

"I’m very aware of that every day because it’ll send me into an asthma attack and if I’m not careful, I end up in the emergency room."

Wynn checks the air quality forecast each morning. If there’s a chance of high ozone or pollutants, a change of plans is necessary.

"Say there is an outdoor rally or an event that’s happening in the community that my presence would be good at, I can’t go on those days. Because I can’t be outside for those extended periods. So it can limit my life, literally."

In Arizona, the limitations, and frustration are frequent for asthma sufferers. In fact, the latest State of the Air report, issued earlier this year by the American Lung Association, suggests Phoenix leads the country when it comes to air quality issues.

"You know, not all the time you can see air pollution. And so it’s not always on the top of people’s mind that it can actually impact your health," said Joanna Strother, Senior Director at the American Lung Association.

A new report is issued every three years, with the latest report analyzing data between 2018 and 2020.

"Ozone pollution acts like a sunburn to the lungs. And so people might experience coughing, wheezing, shortness of breath. It certainly impacts our most vulnerable populations. So children, seniors, people that already have compromised lung issues," explained Strother.

Ozone is most often an issue between April and September, during our hottest time of the year. Here’s why: Ozone is formed when sunlight and heat, two things we have plenty of in the Valley, interact with pollutants produced by vehicle and factory emissions.

In some ways, the cards are stacked against us: Phoenix is in a sunny, hot desert, and our population has been growing.

"In the Valley where we have lots of vehicles on our roadways, and so the transportation sector is one of the leading contributors to air pollution," said Strother.

And as our world continues to warm, days with high levels of ozone are likely to increase.

"Among the three years in this year’s report were among the seven hottest years globally on record. So we know our temperatures are rising, and it’s harder to clean up."

While ozone is invisible, we can often see the result of high-level particle pollution: a brown cloud of haze hanging over the Valley after a windy day, a wall of dust crossing county lines, or even wildfire smoke lofted overhead.

"What we look at in the State of the Air report is that particle pollution is so fine and lodges very deep down into the lungs. It can also cause coughing and wheezing asthma attacks, but also in severe cases can cause lung cancer and even premature death," said Strother.

Again, climate plays a role: wildfires across the west contribute to our problems, and as long-term drought continues to worsen, so does wildfire season.

Over at the Maricopa County Air Quality Department, they’re hoping continued efforts to improve our air will bring passing grades in future reports.

"I think it is possible. Our goal is to bring as much awareness as possible and make it a habit for all of us in Maricopa County to help reduce air pollution."

According to the department’s communication officer, Ari Halpert, that means convincing the public to make small changes.

"Right now our goal is to now focus more on outreach for the public because it does take individual habits to make a collective solution."

For instance, Halpert says air quality alerts aren’t just a warning for at-risk populations to stay indoors. They’re also a request for you, the public, to do your part.

"The same way we opt to recycle a plastic bottle, you can opt to fuel after dark, telework, avoid the drive through that one day, if you see it’s a high pollution advisory then that’s a good day to say, okay, I’ll change this habit."

The department runs programs like "Commit to one day," which aims to curb vehicle emissions by asking people to use public transit, carpool, or telework once a week. They also offer cash vouchers for swaps from gas lawn mowers to electric or battery powered mowers in hopes to limit ozone production.

The efforts have worked.

"In the past 30 years, air quality has actually improved significantly because of increased regulation and awareness to the public. Our outreach programs, education, all of that."

But it’s not just individual changes. Legislation like the Clean Air Act have made a large dent in air quality issues across the country.

To ensure compliance with EPA guidelines, the Maricopa County Air Quality Department inspects businesses and enforces code throughout the year.

"We currently have pretty strict, or very strict, rules and regulations for businesses. We’re one of the most strict here in Maricopa County when it comes to pollution mainly because of our location, our population, all of that makes it so we have to be strict with our businesses," said Halpert.

Even with strict rules and regulations, the Phoenix area still fails to meet EPA requirements for ozone. 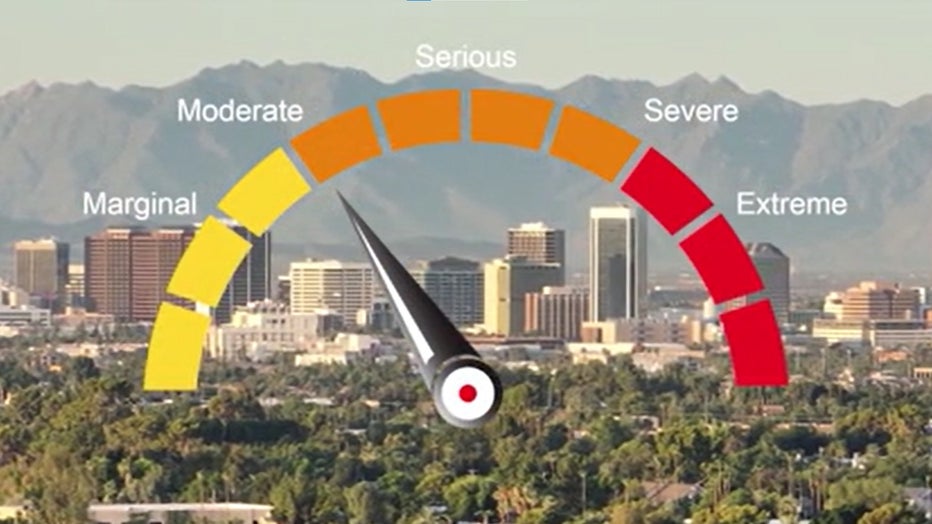 Just this September, the EPA reclassified the region’s level of failure as "moderate nonattainment," which tightens regulations on Maricopa County drivers and businesses.

In fact, it’s likely the county could shift into "serious nonattainment" by 2024, meaning even more strict and costly regulations.

"This means businesses and industries that would want to come here and create jobs, well the permits are stricter, because we have to apply higher and stricter and more advanced engineering controls—so those businesses may opt to not come to a Maricopa County and go somewhere else where they’re in attainment and it’s not as strict."

How Phoenix is planning to tackle its air pollution problem

FOX 10's Krystal Ortiz has more on Phoenix's climate action plan and how the city plans to achieve their clean air goals.

So what is the city of Phoenix doing to combat our air quality problem?

A large feat, as we currently sit at only 70-80% of days, depending on the year.

To help get there, the city council approved the transportation electrification plan. The goal is to have 280,000 EVs on the road by 2030, beginning with electrifying the city’s own fleet.

Halpert calls it, "setting an example."

"We believe we should start ourselves, and step into the future and reduce our emissions, starting with us."

And for Rev. Wynn, that’s a start.

"I’m an optimist at heart. And I like to see the good in people. So while I get frustrated, I know there’s so much more that we can do and we can be hopeful about."

She hopes people play closer attention to air quality alerts, and take more individual actions to improve our air quality. Not just for her health, but for generations to come.

"We’re doing this for our future children. We want our children to be safe, and have healthy environments. We want people to be outdoors and we want to take care of this planet. I mean it’s the only thing we’ve got, and we’ve been called to be stewards of it. And there’s going to be a point where it gets so bad, it’s not just going to affect me, it’s going to affect everybody’s lungs. So, we gotta stop that from happening."

From a neighborhood in south Phoenix a year ago to another one in north Phoenix in 2020, the city’s "Cool Pavement" program is rolling along.