SEATTLE - Starbucks is ringing in the holiday season with its annual Red Cup Day.

The red cup giveaway is available however a customer orders, including orders placed on the Starbucks mobile app and Starbucks Delivery, the company said. 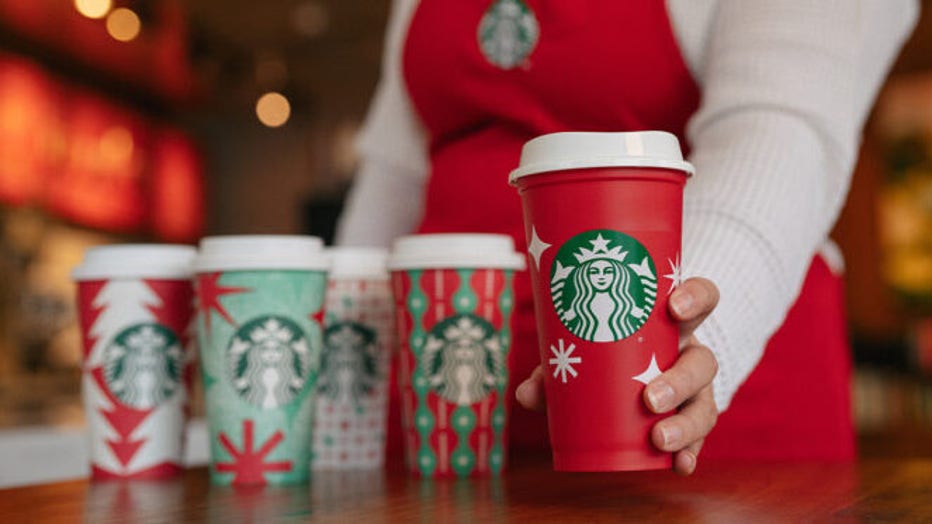 This year’s red cup is made with 50% recycled material.

"You can help reduce single-use cup waste by bringing your clean reusable cup into any U.S. Starbucks store to receive a $.10 discount on your beverage, plus 25 bonus stars for Starbucks Rewards members who use the Starbucks app," the coffee chain said.

The annual Red Cup Day coincided with a strike among Starbucks workers at more than 100 U.S. stores on Thursday, which was their largest labor action since a campaign to unionize the company’s stores began late last year.

Starbucks said it would like for its customers to use more reusable cups as the company gets away from single-use paper cups. (Credit: Starbucks)

How to get the free 2022 Starbucks reusable red cup

Customers who order a handcrafted holiday or fall beverage at participating Starbucks in the U.S. will receive the free reusable red cup, but only while supplies last. Hot, iced, or blended drinks are included in the deal.

The company noted how Starbucks Christmas Blend brewed coffee and Christmas Starbucks Reserve are not included in the offer.

Thanksgiving dinner 2022: Breaking down the cost of some of the most popular holiday dishes

Starbucks workers behind the walkouts say that Red Cup Day is often one of the busiest days of the year.

Strikers were handing out their own red cups with union logos.

Starbucks, which opposes the unionization effort, said it is aware of the walkouts and respects its employees' right to lawfully protest. The Seattle company noted that the protests are happening at a small number of its 9,000 company-run U.S. locations.

"We remain committed to all partners and will continue to work together, side-by-side, to make Starbucks a company that works for everyone," the company said Thursday in a statement.

Some workers planned to picket all day while others will do shorter walkouts. The union said the goal is to shut stores down during the strikes, and noted that the company usually has difficulty staffing during Red Cup Day because it's so busy.

At least 257 Starbucks stores have voted to unionize since late last year, according to the National Labor Relations Board. Fifty-seven stores have held votes where workers opted not to unionize.

Starbucks and the union have begun contract talks at 53 stores, with 13 additional sessions scheduled, Starbucks Workers United said. No agreements have been reached so far.

This story was reported from Cincinnati. This Associated Press contributed.