Storm brought flooding to parts of the Valley

Flash flood watches have been issued for much of Arizona due to stormy weather that has brought&nbsp;showers and thunderstorms parts of the state.

PHOENIX - Flash flood watches have been issued for much of Arizona due to stormy weather that has brought showers and thunderstorms parts of the state.

The National Weather Service says a wet and cold weather pattern from a series of storm systems would begin Tuesday with precipitation increasing Tuesday night and continuing through Thursday night before decreasing through Friday afternoon.

According to the Flood Control District officials, the Valley has seen a healthy amount of rainfall, with much of the area getting one to two inches of rain.

Officials said since the Valley has not seen rain since September, the ground is soaking up a lot of the water. Officials also said, however, that any more rain the area gets from this point may start to cause more flooding and runoff, which they say could reach danger points.

"Tomorrow, a funnel storm comes through and acts on this tropical moisture already here, and we could see some big storms that could drop a lot of rain in a short amount of time over already wet areas, so that’s what we will be watching tonight and tomorrow," said Steve Waters.

VIDEO: Flooding from heavy rain in the Valley

Flash flood watches on Wednesday covered all of Arizona except for the northeast, where a winter storm watch and a winter weather advisory were issued. 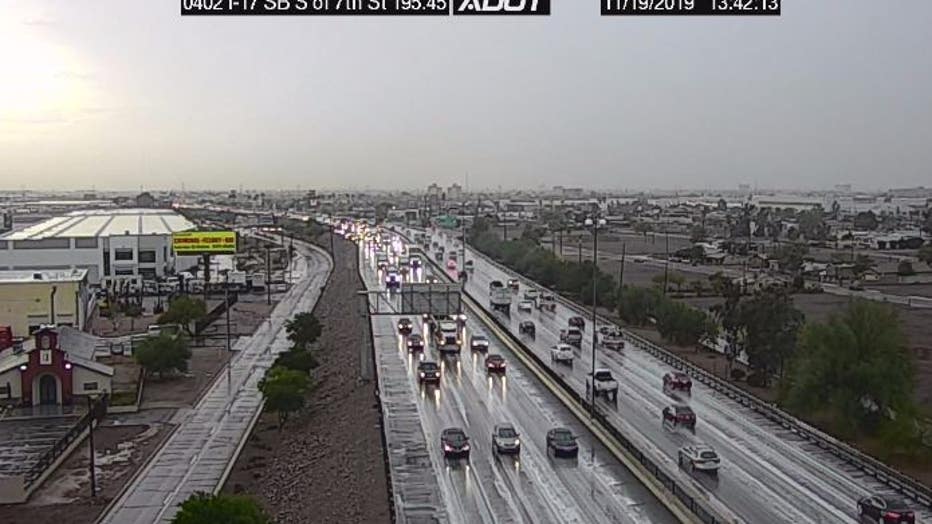 Sandbags have been made available to residents at many different locations in the Valley.

As a storm brought rainy weather to parts of the Valley, people in parts of Northern Arizona are bracing for snow. FOX 10's Nicole Garcia reports.

Officials in Flagstaff say they are expecting up to 10 inches of snow in the city's Downtown area.

Download the FREE FOX 10 Weather app for iPhone and Android