For Lucinda Hinojos, painting is life, and the artist known as 'La Morena' got the phone call of a lifetime months ago, with NFL officials wanting to showcase the Chicana and Native artist's work on one of the world's biggest stages. FOX 10's Lauren Clark reports.

PHOENIX - A Phoenix artist’s work is making a mark on the Super Bowl, while also making history as the first-ever Chicana and Native woman to collaborate with the NFL in this manner.

For Lucinda Hinojos, who also goes by ‘La Morena,' painting is life.

"Painting means to me that you’re able to release and express anything that you want," said Honojos. "For me, it’s more than just art because I’m putting that spirit and that energy into this work."

Hinojos said months ago, she got the phone call of a lifetime from officials with the NFL, who wanted her work to be displayed at one of the world’s biggest stages.

Using acrylics and spray paint, Hinojos created a stunning, colorful desert kaleidoscope of bright hues, along with bold shapes and textures. The artwork is also showcased alongside her Chicana and Native culture.

"From the O'odham basket that I have by the trophy, that represents the Akimel O'odham tribe and the land that we’re on," said Hinojos. "With the mountains, that’s with the White Mountains that you see behind State Farm Stadium, those are also lands from our ancestors, the Hokoham."

The art will be on Super Bowl tickets, and featured at the NFL Experience. It is a stunning painting that captures the essence of Arizona.

"Once I paint something, it’s no longer mine. It’s the people's," said Hinojos. "The Super Bowl painting, for me, is the centerpiece. It unifies everybody in this one space, this one game. It celebrates football, but we’re celebrating each other at the same time, like it doesn’t matter your background or where you come from. It brings everyone together to celebrate footbal, and that’s what’s so great about it, you know?"

Hinojos will be at the NFL Experience, and she is also working with football-maker Wilson on a football design that will be sold there as well. 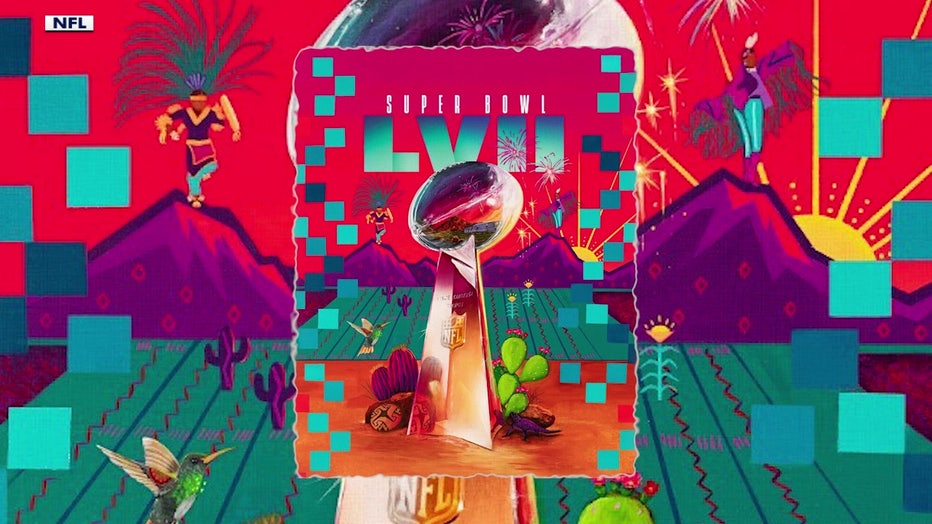