PHOENIX - The Super Bowl is an event many Americans look forward to each year (even if they are paying more attention to the commercials), but it often brings a lot of benefits to the metro area that is hosting the big game.

A number of metro areas in the U.S. have played host to the Super Bowl multiple times, and that includes Phoenix, which is the only metro area in Arizona to have hosted the Super Bowl.

Here's what you should know about Arizona's history with the football tournament.

How many times has Arizona hosted the Super Bowl?

Including the 2023 Super Bowl, Arizona has hosted the Super Bowl four times.

You said Arizona came close to hosting the Super Bowl in 1993. What happened?

According to a 1991 article by the Associated Press, the 1993 Super Bowl was stripped from Arizona because of the state's controversy with Martin Luther King Day.

The game, according to the article, was awarded to the Phoenix area in 1990, but soon after the decision, one of the NFL team owners said he would work to have the game removed if Arizona did not approve a holiday to honor the late civil rights leader.

Arizona's controversy with Martin Luther King Day began in 1987. According to an AP article published that year, the state's governor at the time, Evan Mecham, canceled the holiday, which was created by way of an executive order issued by Mecham's predecessor, Bruce Babbitt.

Canceling MLK Day, according to the AP article, was an action that Mecham promised to make during his gubernatorial campaign. Mecham said Babbitt's executive action was illegal. In addition, Mecham said no other American, including King, rated having a holiday alongside George Washington and Abraham Lincoln.

Mecham's action resulted in condemnation from other politicians and civil rights leaders, as well as other Arizona residents.

Read More: Arizona was the last state to make Martin Luther King Jr. Day a state holiday; here's what you should know'

Arizona was later awarded the 1996 Super Bowl on a tentative basis, with the condition the state passes a referendum on making MLK Day a state holiday. Documents on the Arizona Secretary of State's website state that a ballot measure to create an MLK Day state holiday, while combining the Lincoln Day and Washington Day holidays into President's Day, made it onto the November 1992 ballot as Proposition 300. That measure was approved by voters.

Where were the Super Bowl games held in Arizona?

All Super Bowl games in Arizona were played in the Phoenix area.

Besides the 2023 game, two other games were played at what is now known as State Farm Stadium:

Have the Cardinals ever played a Super Bowl game in Arizona?

The Arizona Cardinals have made one Super Bowl appearance. It happened in 2009, a year after Arizona hosted Super Bowl XLII.

In Super Bowl XLIII, which was played in Tampa, Fla., the Cardinals lost to the Pittsburgh Steelers.

Is it common for an NFL team to play the Super Bowl on home turf?

Those two games were also the only two games in Super Bowl history where a team played the Super Bowl at their home stadium.

How will the Super Bowl benefit Arizona's economy?

For 2023's Super Bowl, experts with Visit Phoenix say it should bring in about $600 million to the local economy.

"We were very excited," said Eric Kerr, Vice President of Insights and Development with Visit Phoenix.

Kerr has been working non-stop to market and promote the city, ever since it was announced five years ago that the Super Bowl will return to Arizona.

"So, we've been really kind of tracking the teams that have been doing well, making sure that we are doing some digital marketing and promotions in markets that we feel have the opportunity to make the Super Bowl, so some Midwest and East Coast teams," said Kerr.

What kind of an impact did the last Super Bowl have on Arizona?

"Direct spending in the destination was over $500 million, and that trickles down into tax revenues for city, state, and county that can then pay for public services," said Kerr.

For the 2015 Super Bowl, over 121,000 visitors came to the Phoenix area. For the Saturday before the game, hotel occupancy was 95%, the seventh highest ever for the area.

For the Monday after the 2015 Super Bowl, Phoenix Sky Harbor Airport saw its busiest day ever, with over 180,000 passengers. Rental car centers also saw a boost, with around 12,000 rental cars that were scheduled to be returned, which is triple tje usual numbers.

So, we are expecting less money this time around for Arizona. Why?

The dollar amount is expected to be less for the 2023 Super Bowl, because the Pro Bowl will not take place in the Phoenix area this time around.

The 2023 Pro Bowl Game is scheduled to take place in Las Vegas, Nev.

"It was an opportunity to showcase the destination. We are always looking to book events years and years in advance, and so, to have something this big on the books, five years ahead of time is a major opportunity for the market," said Kerr.

Who's hosting the Super Bowl after Arizona is done hosting it this year?

It was decided in 2021 that the Allegiant Stadium in the Las Vegas area will play host to Super Bowl LVIII on Feb. 11, 2024.

Originally, 2024's Super Bowl was to be played in New Orleans, but according to NFL.com, a change was made because of a scheduling conflict with Mardi Gras.

New Orleans will host the Super Bowl on Feb. 9, 2025. Mardi Gras is set to take place on March 4 in 2025, thus alleviating the issue of a scheduling conflict. 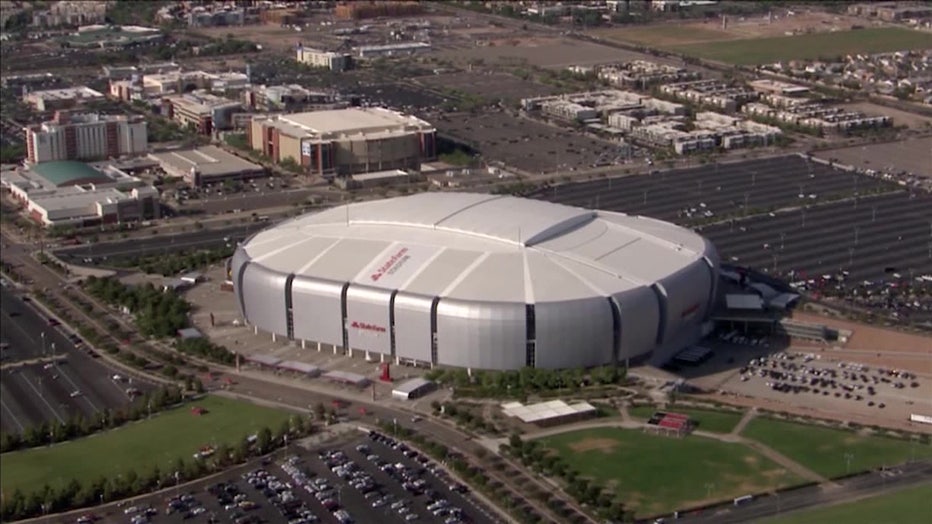