The War Powers Act of 1973 mandates that the President report to lawmakers within 48 hours of such an attack abroad.

On Saturday, President Donald Trump posted tweets, stating that the United States is prepared to fight back if Iran attacks US interests.

There are definitely mixed feelings on this attack. Many say it will start a war, while others are applauding the move. President Trump says he takes comfort in knowing that Soleimani's reign of terror is over and that the general was planning attacks on Americans.

Arizona Senators Martha McSally and Kyrsten Sinema are weighing in on the death of the Iranian general.

In a tweet, Sinema stated, "The country deserves, and the administration must provide, a coherent effective strategy to safeguard our national security. My highest priority is the safety of Arizona families. Soleimani was a terrorist and I stand with all Arizonans in honoring the Americans killed and harmed by his actions. Iran's aggression should be checked and we must protect all Americans at home and abroad."

In an interview with FOX News, McSally said the airstrike was the right thing to do.

"General Qassem Soleimani is an evil, evil man. And he is the leader of terrorist organizations.. state-sponsored terror," she said. "This was a disruption after many warnings in using other elements of power to take out a terrorist leader. Just like al-Baghdadi, just like Osama bin Laden.. and he was on Iraqi soil to plan more attacks against American lives. So it was the right thing to do.. to have a measured, specific strike to take him out in order to disrupt these attacks and protect Americans."

Back here in the Valley, about two dozen protesters gathered near Sen. McSally's Phoenix office in the area of 22nd Street and Camelback Road with a message: No war with Iran. 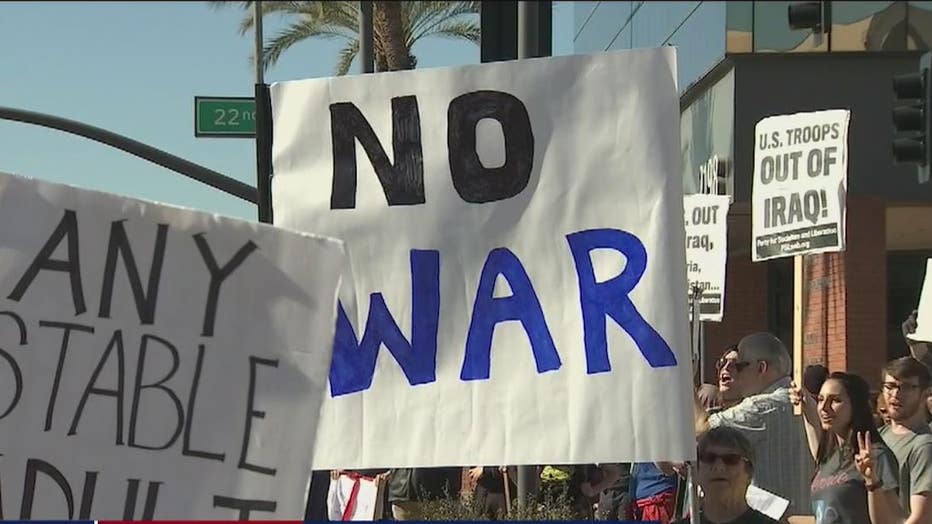 "The community is here again, alongside millions in the US and the world in opposition to the US aggression and imperialism in Iraq and Iran.. so we want the troops home and to cease endless war," said Morgan Mo.

The Department of Homeland Security issued a statement:

“At this time there is no specific, credible threat against the homeland. The Department issued this bulletin to inform, share protective measures, and reassure the American public, state and local governments, and private sector partners that the Department of Homeland Security is actively monitoring and preparing for any specific, credible threat, should one arise” said Acting Secretary Wolf. “The Department is operating with an enhanced posture and various operational components are taking protective measures where prudent and necessary. We have been in constant communication with Congress and interagency partners. The American people should feel assured the entire Department is working for them to keep them safe.”