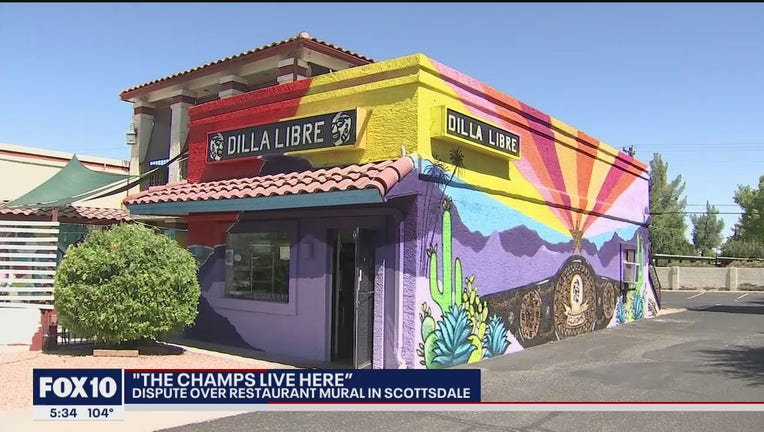 SCOTTSDALE, Ariz. - A colorful reminder that through tough times, we should never give up -- this mural was painted out front of Dilla Libre in May.

But by early June, owner Mike Bomb says the City of Scottsdale told him to take it down. They also issued Bomb a warning that the restaurant could face fines of up to $2,500 a day as long as the mural stays up, and Bomb could face up to 60 days in jail.

"It was just beige. It hasn't been painted in this century. It was super ugly, so we felt we were doing everybody a favor by making it a little bit prettier," Bomb said.

On top of issues between the restaurant's mural and the city, Dilla Libre is still trying to stay afloat through the pandemic.

"We lost all of our catering business, all of our food truck business," Bomb said. "It's a big problem right now because our dining room isn't open and we're struggling to survive as it is, so to put that extra load on us is pretty difficult right now," Bomb said.

While also dealing with construction work close by the restaurant.

"To make matters worse, we were battling with an eight-month construction project the city put on that was even worse than coronavirus," Bomb said. "We lost over $100,000 last summer."

Bomb says he reached out to the City of Scottsdale and was told to gather community support. He hopes loyal customers and the public will sign his petition to keep Dilla Libre open and the mural out front.

The city of Scottsdale gave FOX 10 a statement that reads:

"Changing the exterior of a commercial building (including adding a mural) is governed by the city’s Architectural Design Guidelines and the Development Review process. This process has been in place in Scottsdale for many years, and is common in many communities to promote design that is compatible with each area.

The process is governed by the city’s Development Review Board as outlined in Article 1 of the city’s Zoning Ordinance.

In this case, the building tenant did not follow that process, and altered the exterior design of a commercial building (painted a mural) without design approval.

A notice of violation was issued in May. Planning staff and the tenant spoke June 25 to discuss the Development Review Board approval process; he was provided the information to proceed with that."