PHOENIX - Members of President Donald Trump's legal team have scheduled a public hearing with select members of Arizona's legislature to gather and examine any evidence of election irregularities and fraud in the state.

The hearing, planned to begin on Nov. 30 at 9 a.m., is intended to collect any evidence that would justify holding a special session for Arizona lawmakers to investigate further.

The event was billed as a “fact-finding hearing” featuring members of Trump’s legal team and members of the Arizona Legislature, but top leaders of the Republican-controlled Legislature told The Associated Press that the planned gathering was not an official legislative event.

According to press release by state Rep. Mark Finchem, R-Oro-Valley, the gathering is intended “to hear testimony and view evidence related to allegations of electoral compromise related to the 2020 election.”

Monday's hearing will be at the Hyatt Regency in downtown Phoenix. Trump's personal attorney Jenna Ellis and Rudy Giuliani are expected to attend. It wasn’t clear whether the Trump attorneys would be present in Phoenix or addressing the gathering remotely.

No evidence of fraud or hacking of voting machines has emerged during this election in Arizona.

Five challenges have been filed in Maricopa County Superior Court in Phoenix since Nov. 3 and four of those have been dismissed. An initial hearing on the fifth is scheduled Monday, the same day as the hotel event and the state election canvass at the state Capitol.

Among the Trump supporters using social media to publicize the Arizona event were state GOP Chairwoman Kelli Ward and U.S. Rep. Paul Gosar, R-Ariz. “I will be there,” Gosar declared on Twitter.

The Arizona Legislature is not in session and Senate President Karen Fann said neither she nor House Speaker Rusty Bowers, authorized fellow Republican lawmakers to hold a hearing at the Capitol on the election.

“So they found a site off-site to hold it,” Fann said.

The planned gathering drew scorn from some Democrats.

“Might as well have a boat parade and call it a legislative hearing. This unsanctioned unofficial circus sideshow will have no bearing or impact on @JoeBiden’s victory in Arizona,” the Democratic Caucus of the Arizona House said in its Twitter feed. 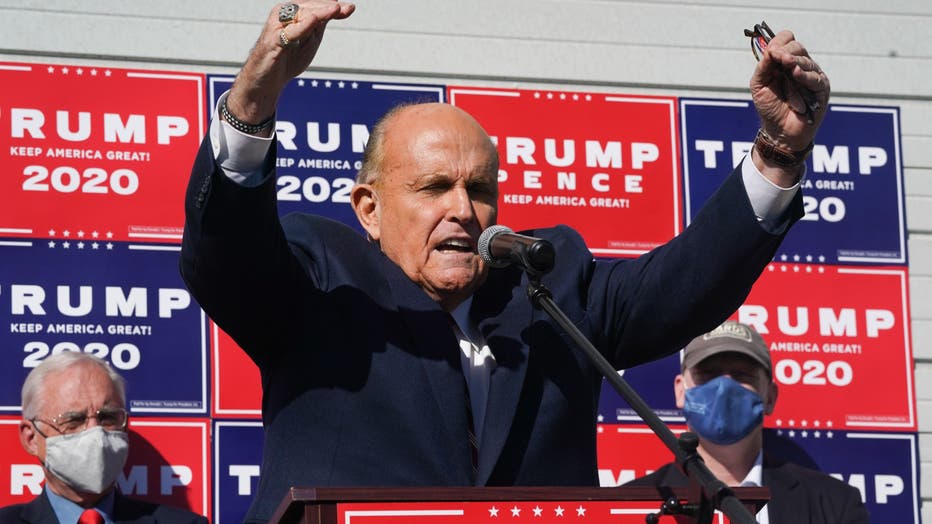 Attorney for the President, Rudy Giuliani, speaks at a news conference in the parking lot of a landscaping company on November 7, 2020 in Philadelphia. (Photo by Bryan R. Smith / AFP) (Photo by BRYAN R. SMITH/AFP via Getty Images)

Earlier this week, Pennsylvania participated in a similar hearing, and MIchigan will have one on Tuesday.

The event is open to the public, and anyone interested in attending can secure a ticket online.

Arizona GOP chairwoman Kelli Ward has filed a lawsuit against the state alleging that there were an unusually high number of duplicated ballots.