TAMPA, Fla. - Flowers are blooming in an unconventional spot. It's a vertical hydroponic wall attached to a small generator.

"Which is basically making use of the nutrients and water recovered from the waste water that our system is treating," explained University of South Florida researcher Jorge Calabria.

The mini sewage system is called the NEWgenerator. It was developed by USF engineering professor Dr. Daniel Yeh and his research team.

“NEW" stands for nutrients, energy and water, which the generator recovers from human waste.

"This system works well,” said Yeh. “It allows us to get rid of our waste and actually recover clean waterfrom that.”

"Think of this as a renewable natural gas that's sitting in our waste and we're, for the most part, not mining that. So we can mine that for heating water, cooking, generating electricity, a number of uses," explained Yeh.

"Solar panels provide enough to keep everything running. Even in a power outage it can supply enough power to keep the system running until maintenance can come and restore power," said researcher Manuel Delgado.

And it's not just flowers that could grow from a system like this.

Professor Yeh received a grant from the Bill and Melinda Gates Foundation to develop this in hopes of alleviating some of the problems worldwide with water and sanitation.

They had success during a test in India. The unit was connected to electronic toilets, handling up to 100 users a day.

"What we're hoping to do next is provide the service to the schools in South Africa, maybe put the system in some of the refugee camps around the world that's struggling with some of these same issues,” Yeh said. 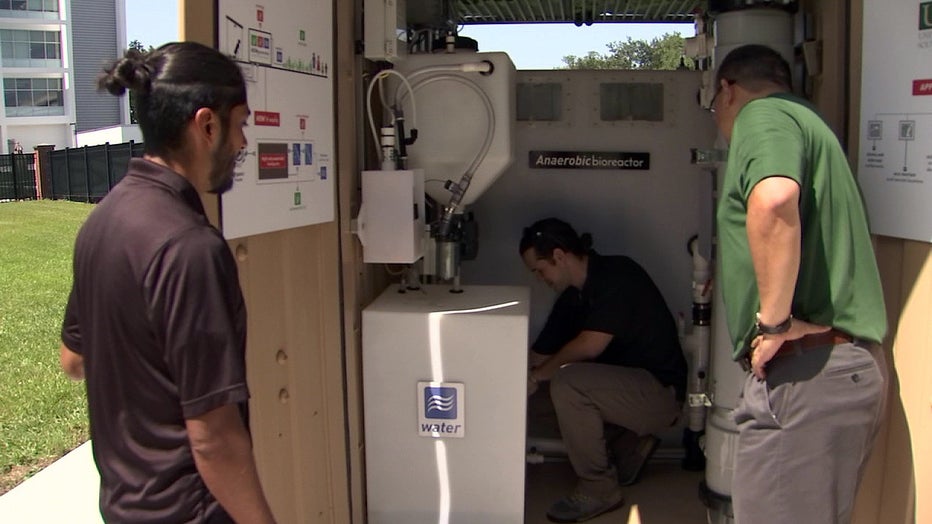 But there are other uses.

"When there's a disaster, like a hurricane or earthquake, the infrastructure just kind of fails,” Yeh explained.

"Puerto Rico had no chance to get their infrastructure,” Delgado noted. “This could have helped remarkably.”

And it may impact Florida's algae bloom water dilemma by removing toxic waste.

It's waste that's not wasted.