One of the protesters struck is seen in the video falling backward as the LAPD vehicle comes toward him. The protester appears to be caught briefly under the front of the vehicle before the driver reverses.

LOS ANGELES - A Los Angeles Police Department vehicle was captured on video striking at least two protesters surrounding the SUV during a protest Sunday in the wake of the death of George Floyd during an encounter with police in Minneapolis, Minnesota.

Sophia Lee posted a video on Twitter which showed several protesters standing in front of and around the police vehicle in Downtown Los Angeles’ Pershing Square, when suddenly, the officer accelerates.

One of the protesters struck is seen in the video falling backward as the LAPD vehicle comes toward him. The protester appears to be caught briefly under the front of the vehicle before the driver reverses.

The second person struck was knocked to the ground, landing several feet away, footage shot from an overhead media helicopter showed. 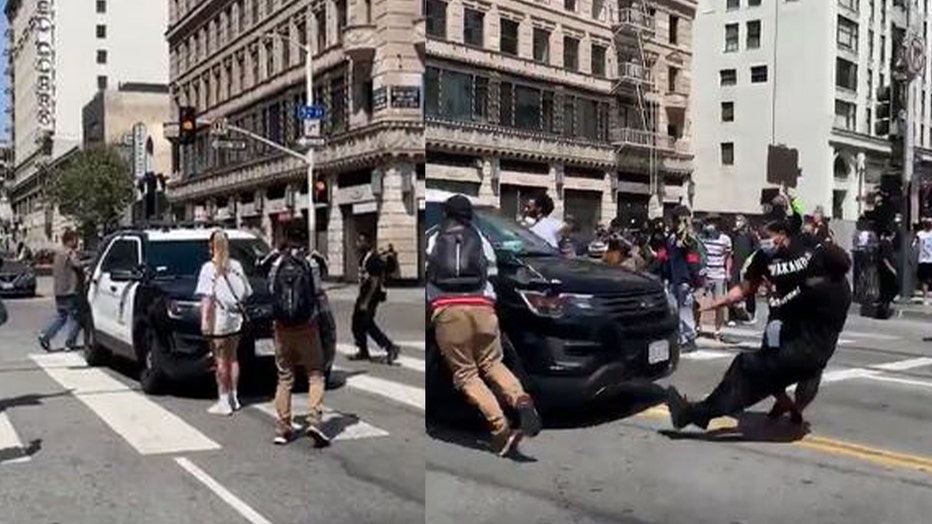 A video on Twitter which showed several protesters standing in front of and around a police vehicle in Downtown Los Angeles’ Pershing Square, when suddenly, the officer accelerates. (Credit: Sophia Lee via Storyful)

It was not immediately clear if the protesters were injured.

A spokesperson for the LAPD, who did not give his name, said, "A traffic report was taken and is currently under investigation."

The incident comes a day after protests erupted in the city and the rest of the country, with some of the demonstrations descending into violence and looting.

Protests grew in Santa Monica while other crowds were seen looting, vandalizing and stealing from stores at the Third Street Promenade shopping area. A countywide curfew was put into effect Sunday night in response by Los Angeles County Sheriff Alex Villanueva and the county’s board of supervisors.

A day earlier, Los Angeles Mayor Eric Garcetti asked for the California National Guard to be sent into the nation's second-largest city as crowds torched police cars and vandalized and burglarized stores while clashing with lines of officers.

Garcetti said he asked Gov. Gavin Newsom for 500 to 700 members of the Guard.

A mostly peaceful Saturday demonstration near The Grove, a popular outdoor mall in the middle of the city, devolved in the afternoon when protesters set several LAPD cars on fire, broke store windows and climbed on top of a bus.

Protesters took to the streets across America again Sunday, with violence flaring in pockets of largely peaceful demonstrations fueled by the killings of black people at the hands of police. A truck driver drove into demonstrators in Minneapolis nearly a week after George Floyd died there after pleading for air as an officer pressed a knee into his neck.

Protests sprang up from Boston to San Francisco, with people stealing from stores in broad daylight in Philadelphia, cities across California and elsewhere. In Minneapolis, the tanker truck sped into a peaceful crowd of thousands on a closed highway, but no one appeared to have been hit, authorities said.

Disgust over generations of racism in a country founded by slaveholders combined with a string of recent racially charged killings to stoke the anger. Adding to that was angst from months of lockdowns brought on by the coronavirus pandemic, which has disproportionately hurt communities of color, not only in terms of infections but in job losses and economic stress.

“Maybe this country will get the memo that we are sick of police murdering unarmed black men,” said Lex Scott, founder of Black Lives Matter Utah. “Maybe the next time a white police officer decides to pull the trigger, he will picture cities burning.”

Storyful and The Associated Press contributed to this story.