A man who was inside the home suffered serious injuries. A neighbor said he found him standing in the rubble, burned and in a daze. He's now at Parkland Hospital.

WESTWORTH VILLAGE, Texas - Investigators are trying to find the source of an explosion that destroyed a home in Westworth Village near Fort Worth that left one person seriously injured Thursday morning.

A man who was inside the home suffered serious injuries. A neighbor said he found him standing in the rubble, burned and in a daze. He's now at Parkland Hospital.

People living in several other nearby houses still aren't allowed to go home.

There was no major damage to other nearby homes, but debris was scattered all around the neighborhood.

Neighbors told FOX 4 they heard a loud boom and felt their homes and windows shake.

Debris from a home that exploded in Westworth Village is now scattered across the street. (SKY 4)

Craig Strain lives nearby. He says he rushed over to the home and pulled out the man inside.

"There was a fella standing in the middle of the house just screaming. I started talking to him and asked him if he was okay. He said he didn't know. I said, ‘Hang on, I'll get you out of here,’" Strain recalled. "I talked him down. I said, ‘Do you have any clothes?’ He said, ‘in the room.’ Well, you couldn’t tell where his room was. Part of it was in my yard. I found a piece of clothing to cover him up with, and we worked our way out of the house moving some debris along the way."

Strain said that's about the time Fort Worth firefighters arrived on scene and took over care of the man.

'Their front door is on the hood of my 4-Runner': Neighbors talk about Westworth Village home explosion

At least one person was hurt in a house explosion Thursday morning in the Fort Worth suburb of Wentworth Village. Neighbors Tracy Sanders and Codi Tanksley share what happened.

The man, who was alone inside the home at the time of the explosion, was taken by care flight to Parkland Hospital in Dallas, which houses a world-renowned burn center.

Denita Shelton owns the home. She says she rented it out just last month to a couple with two young kids. The man's wife called her frantic. She and the kids were gone when the explosion happened.

"She asked me if I could take the dog with me today and then she was going to Parkland to see how he was," she recalled.

Their dog, Charlie, survived the blast.

"I think he got a little charred. He was in the backyard. His whiskers are all singed," Shelton said.

Investigators are trying to find the source of an explosion that destroyed a home in Westworth Village near Fort Worth that left one person seriously injured Thursday morning.

Before renting it out, Shelton lived in the home for 45 years and says she never had any problems.

Neighbors are desperate for answers.

"I heard a loud explosion, what I believe to be an explosion," recalled neighbor Tracy Sanders. "Originally, I thought the tree next door fell on the house. But in my mind, I knew it was an explosion. The person next door was screaming. All the windows were gone. There was glass all over the bed and everywhere in the house. Sheet rock from the ceiling was on the floor."

Police and firefighters responded to a home explosion in the Fort Worth suburb of Westworth Village Thursday morning. Neighbors said they felt their windows shake.

"It was a bomb. It was literally an earthquake. Shook everything around us," said neighbor Codi Tanksley. "Their front door is on the hood of my 4-Runner, and their tree that was in their front yard is on the side of my roof."

There is Ring doorbell video from the home directly across from the explosion, but Tanksley was told by law enforcement to not share it.

A photo by Christopher Cook with the White Settlement Police Department shows debris scattered in the street. 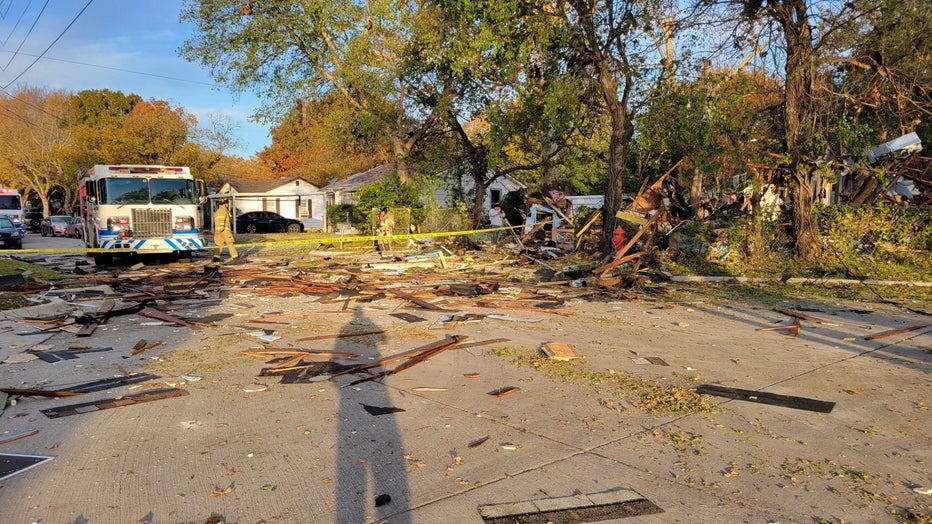 The unidentified man who was care flighted to Parkland was said to be in critical condition.

A woman at the scene told FOX 4 off-camera that she was the man’s wife. She said he suffered burns on 25% of his body, but he is expected to survive.

Five additional homes were deemed uninhabitable due to structural damage.

Atmos Energy has crews out here checking the gas lines.

An immediate cause is still unknown.